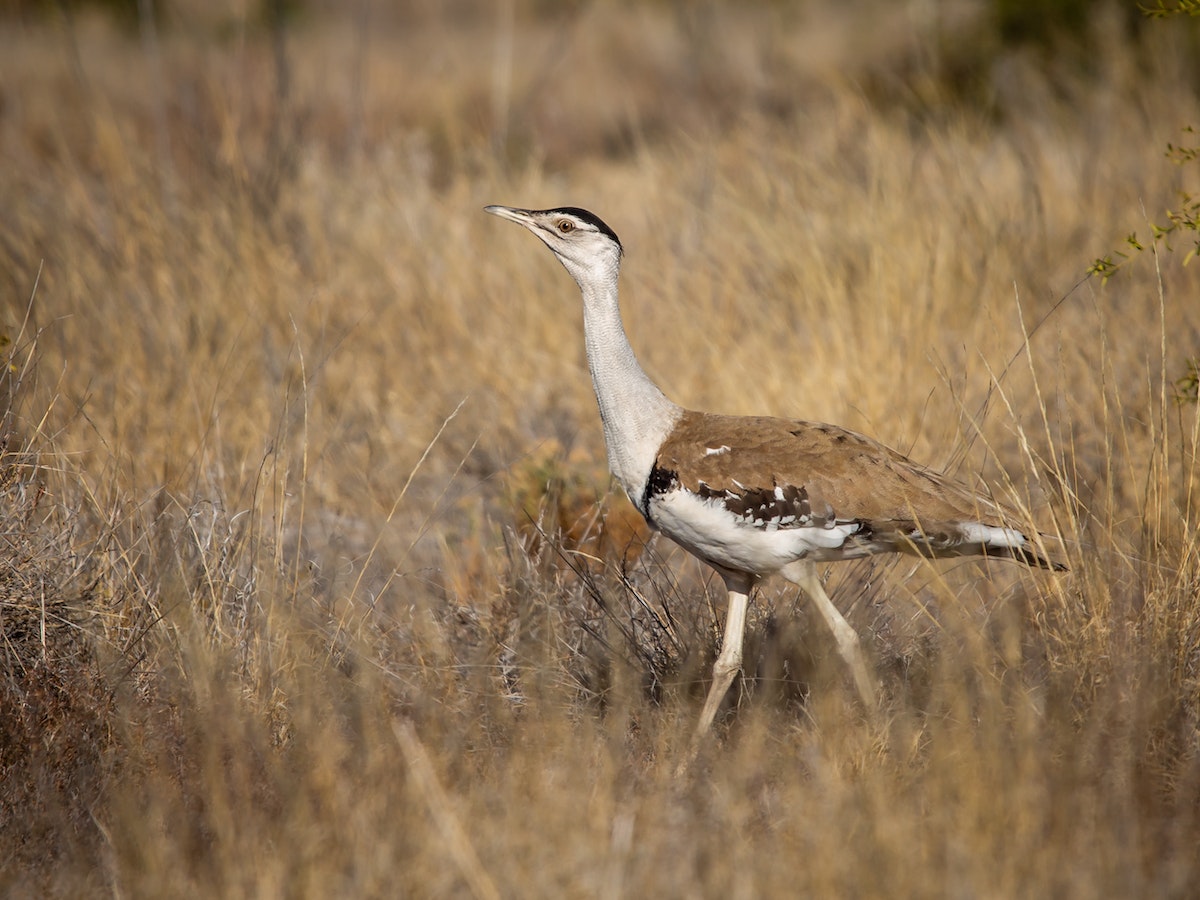 Across the Barkly Tablelands

Travelling south on the Stuart Highway and in search of a road we had not been down before we took a left turn at the Daly Waters Hi-Way Inn to head down the Carpentaria Highway and on to the Barkly Tablelands.

The Barkly Tablelands is a rolling mitchell grass plain that runs from the Northern Territory into Far Western Queensland.  It kisses the Gulf of Carpentaria to the north and just this small taste of the region has us promising to return for further exploration.

The single lane bitumen “highway” running from Daly Waters to Borraloola made us think we had been transported back 30 years but at least it was bitumen and although there were plenty of potholes, there were no vehicle destroying corrugations. 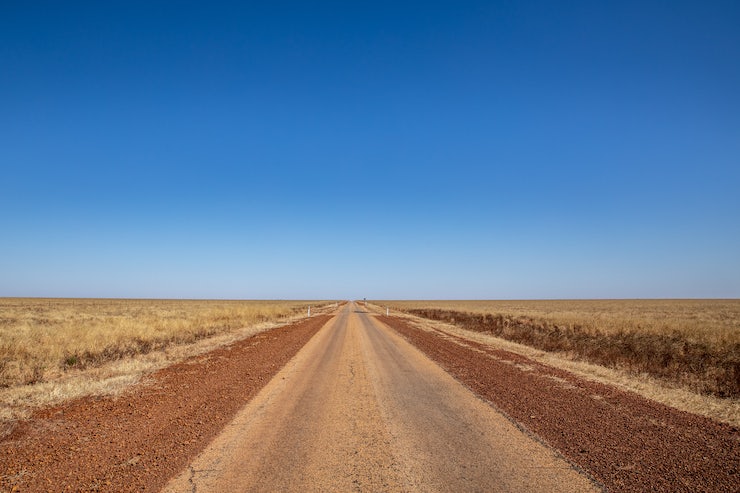 We camped a couple of nights at Borraloola using it as a base to explore Bing Bong, yes that’s a real name and King Ash Bay.  The town exists to service nearby Indigenous Communities, the McArthur River Mine and increasingly, tourists heading to the Gulf and travelling “The Savannah Way”. Any thoughts we had entertained about exploring further down the Savannah Way were dissuaded by a parade of vehicles arriving on the back of recovery trucks and tales of the horrific road conditions around “Hells Gate”. 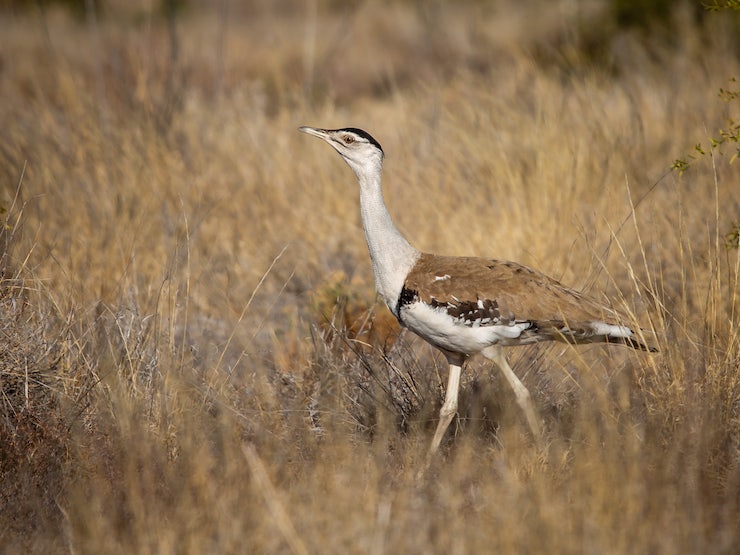 Australian Bustard on the roadside

Heading for the coast we explored the area around Bing Bong, which is a loading facility transporting Zinc/Lead concentrate from the McArthur River Mine. The concentrate is barged out from the facility to ships waiting off shore.

While exploring the area we got chatting to a family from West Island.  They are the Traditional Owners, Yanyawa People. The women live in Borraloola during the week so that the kids can attend school. On weekends there is much excitement as they head home to the Island.  When we met them they were waiting for the elder woman’s son to bring the boat over  for the trip home.  The boat driver had been sidetracked by a dugong lazing in the waters at the mouth of the river.  The Grandmother showed us the grass the dugong would be eating and talked about life on the Island where the Turtles nest.  We gave them a hand to shove the boat off and took photos, which we have sent to them. 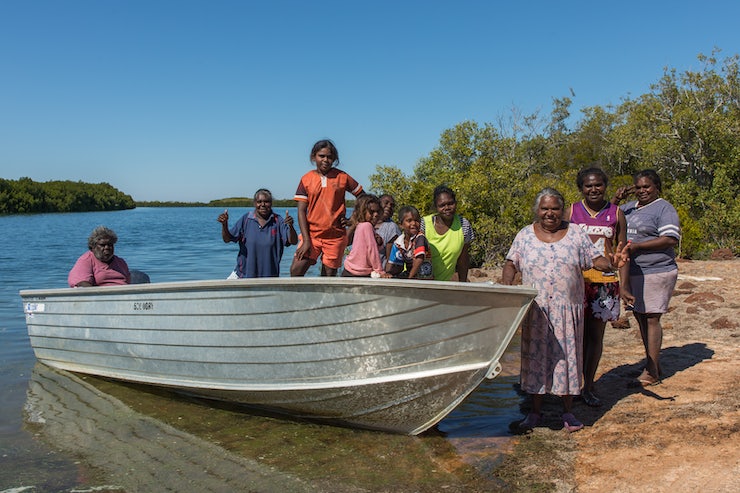 King Ash Bay just a few kilometers further east, is a fishing mecca as hundreds head to the area to fish for the elusive Barramundi.  A small caravan community forms during the dry season. Life membership is available to the King Ash Bay Fishing Club, which guarantees members prime camping position on the banks of the River.  A club-house offers meals, happy hours and entertainment in the form of fishing competitions, bingo and other nightly activity. 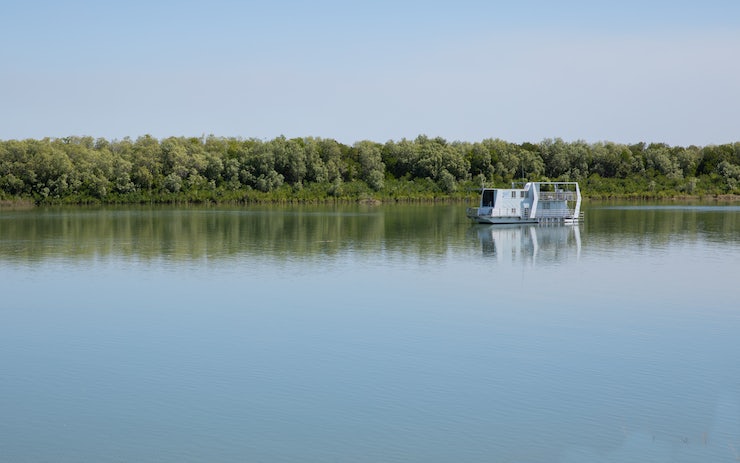 Views from the campground at King Ash Bay

Leaving Borraloola we called at Caranbirini Conservation Park and spent time watching pairs of Green Pygmy Geese go about their business.  In this park there are also examples of the sandstone pillars that can be found in the area.  The best examples of these “Lost City” structures are further north in Limmen National Park, just out of our reach on this occasion but one of the places we will return to. 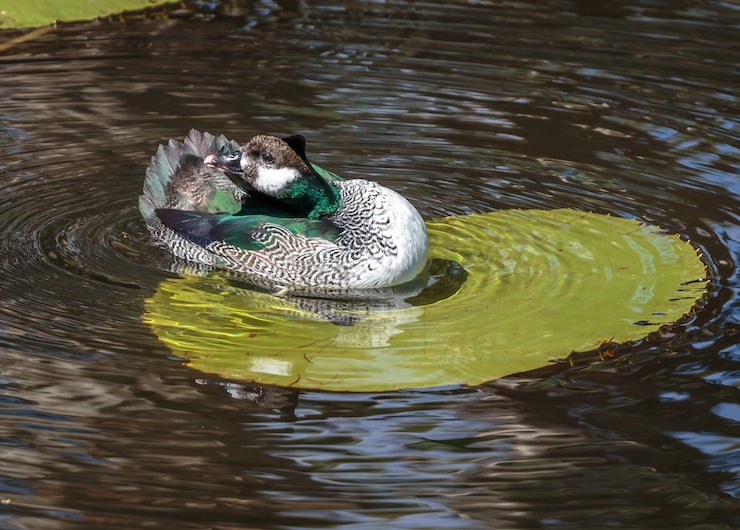 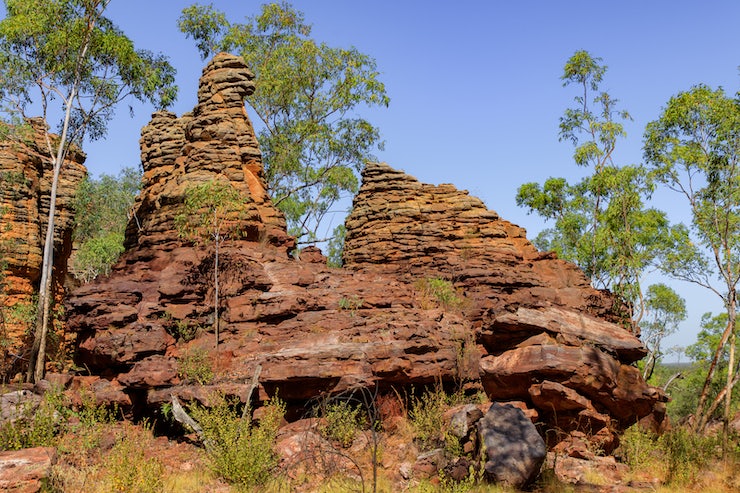 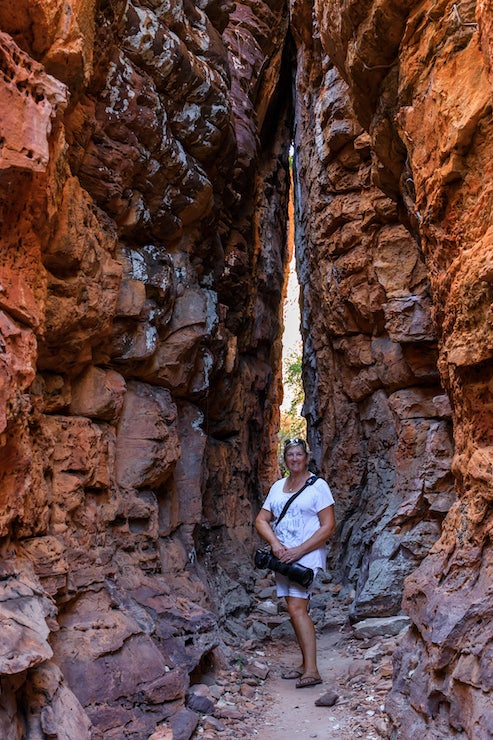 At Cape Crawford, the junction of the Carpentaria and Tablelands Highways the Heartbreak Hotel pays homage to Elvis with pink Elvis and Priscilla toilets.  Camping is available but we chose to push on to Barkly Homestead on the Barkly Highway.

Barkly Homestead is in fact a road house and a popular stop-over for people travelling north and west from the Eastern States.  It has good camping facilities and a pretty good Bar and Restaurant for a night off from cooking.  There is regular entertainment during the dry season.  The night we were there we listened for a while and pretty soon concluded that the singer was a bit better than the average campsite entertainer.  A quick google search revealed that Kenny Joe Blake had made number 4 on the Country Charts with his song Capricorn Rain and another song he wrote made it on to Slim Dusty’s final album.  Bazz bought the CD just in case one night wasn’t enough.

The night at Barkly developed into the worst weather of the trip as the wind picked up and blew a gale, making packing up the following morning a challenge in the cold and dust.

After crossing the boarder into Queensland our next stop was a fabulous free camp on the banks of Lake Canellan on the Georgina River at Camooweal.  This tiny town, just two servo’s, a pub and a town hall have captured the travelling market by allowing one of the best free camps we have seen.  In return the travellers leave the area tidy and spend their money in town.  We stayed three nights and loved watching the passing parade of birds on the lake.  The highlight without a doubt was sitting down to breakfast while a pair of Brolga danced just meters away. 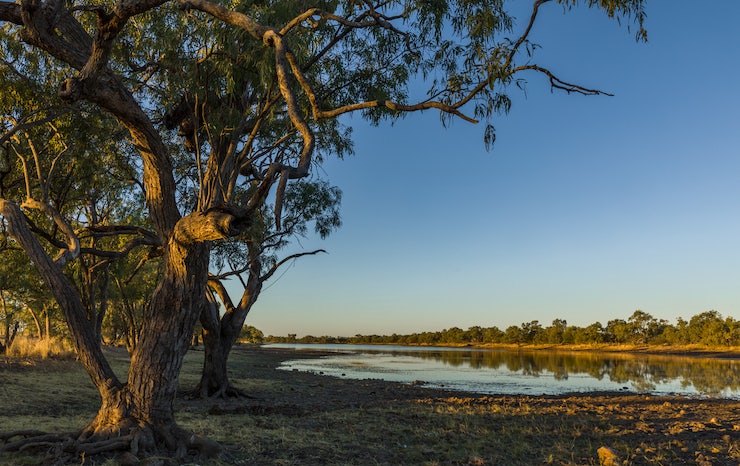 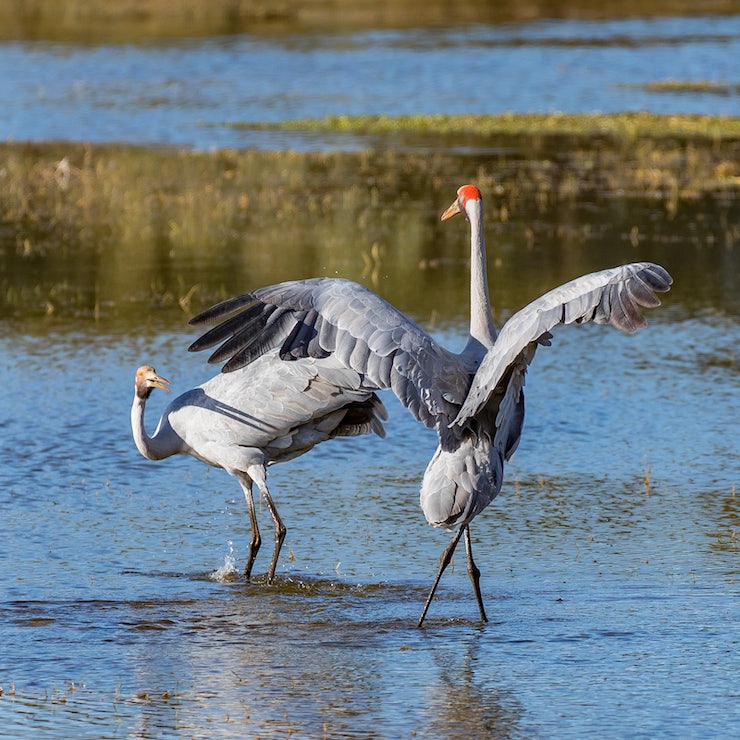 The last stop on the Barkly was the City of Mount Isa.  The City with a population of about 22,000 is built around the mine and it is interesting to arrive and find the mine in the middle of town.  There is certainly no doubt about the major industry although Mt Isa is also the regional centre for surrounding station country and Indigenous Communities.  The highlight of the calendar is the Rodeo just recently clocking up 60 years. 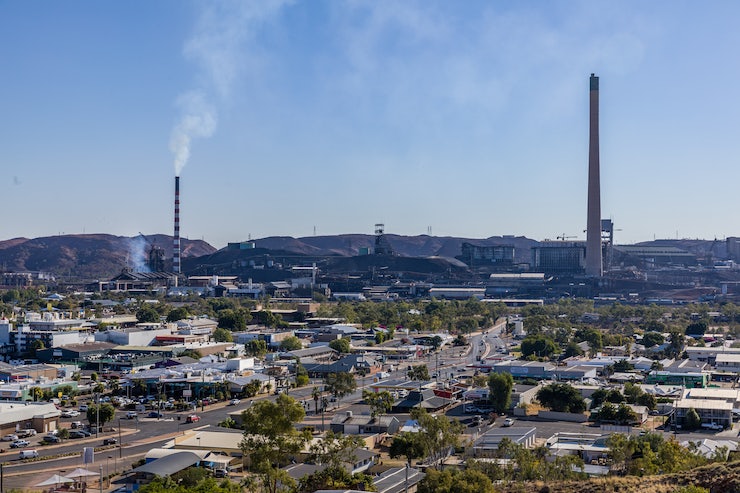 Mt Isa from the Lookout

Chatting to fellow travellers we realized that this region needs much more time exploring by us.  We will return to visit Lawn Hill National Park, Lorrella Springs and Gregory National Parks another time.