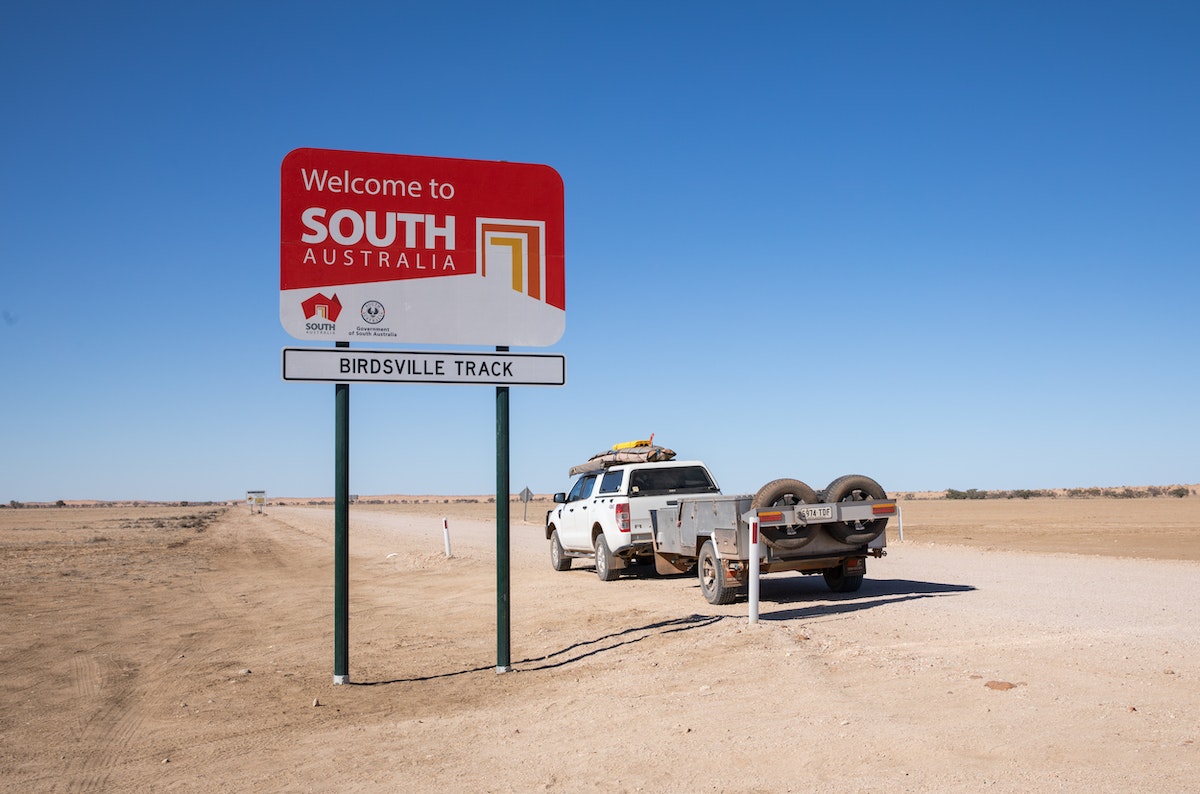 Three former stock routes through outback South Australia to South West Queensland provide a modern day mecca for 4 Wheel Drive enthusiasts.  The Oodnadatta Track, The Birdsville Track and the Strezlecki Track wind their way across gibber plains, flood plains (occasionally) and desert. We chose the Birdsville Track for our trip home to Port Lincoln from Birdsville this time. (see the Diamantina Blog for more on Birdsville). 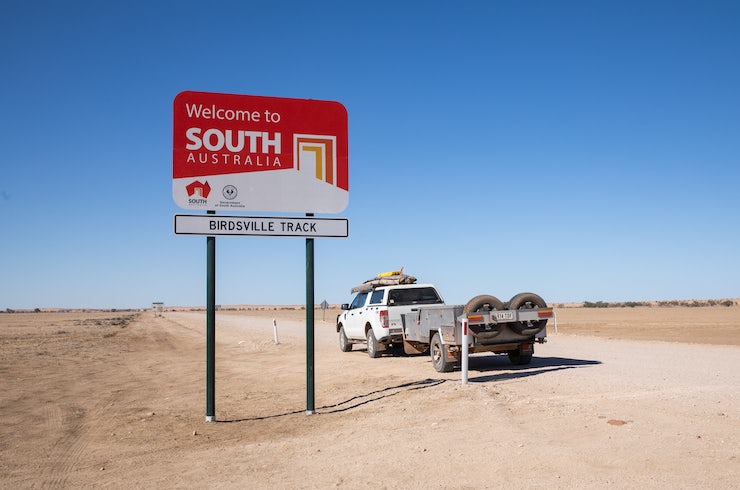 The Birdsville Track is 513 kilometres of gravel road linking Birdsville in Western Queensland to Marree in Northern South Australia.  This once legendary stock route is now an important and popular tourist attraction and combined with the Strezlecki Track, forms part of the Outback Loop.

The area this year is “as dry as a lime burners boot”.  There has been no significant rain around the Birdsville Track region for at least 3 years. There was little vegetation of any form to be seen and the few scattered native shrubs dotting the dunes and open plains were more brown than green, withered and obviously under stress although, against all odds, there were a few roadside wattles coming into flower.

This drive down was in stark contrast to an earlier venture in 2001 following good rains when the nearby Simpson Desert was described by one fellow traveller (Birdsville’s resident artist at the time, Wolfgang John) as having “fields of flowers”.  It was something of a shock to see the difference.

The section from Birdsville to Mungerannie Road House was flat and for the first 100 kilometres or so, the road was mostly claypan and comparatively relaxing driving, I am sure at times we hit a speedy 80 kilometres an hour.  The next 200 kilometres took us through gibber plains and there were more than just a few gibbers on the road, no cruise control here. This section was taxing and slow going. 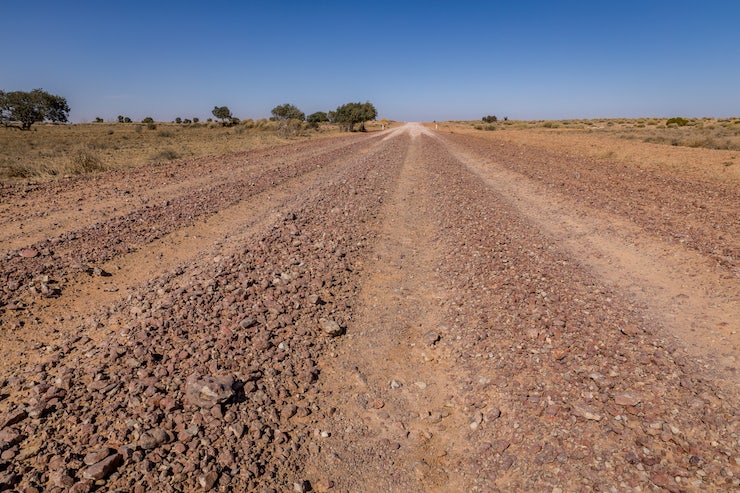 Mungerannie Road House was a welcome sight later that afternoon.  Large grey clouds had gathered over head and it looked like it could rain. Unfortunately and perhaps predictably for the locals it didn’t. 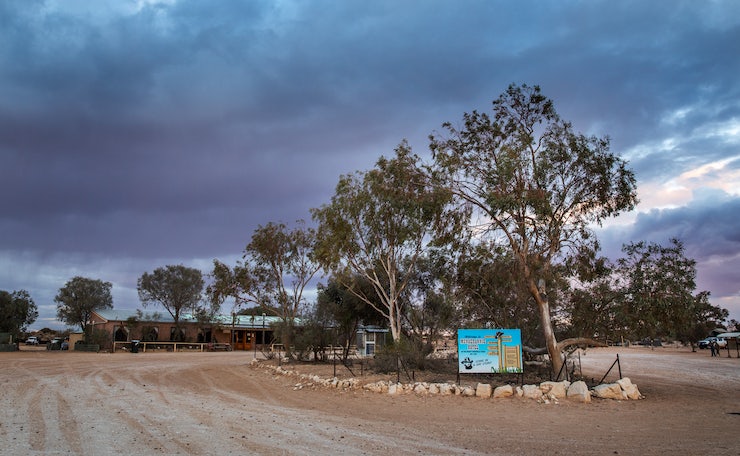 As we pulled up to the roadhouse, we noticed one of the trailer tyres slowly getting flatter. Not bad, our second puncture in 18 weeks on the road. We were not alone as the driver in front of us had suffered 2 punctures just on his way down from Birdsville, expensively shredding one beyond repair. The Road House does a roaring trade in tyre repairs and replacements and Phil (the roadhouse owner) had ours patched and back on very quickly.

The Bar is an iconic bush style Pub, loaded with a rustic collection of memorabilia the strangest being locks of hair and beard dangling from the ceiling. A tad disturbing actually, glad we weren’t the only ones there that night. 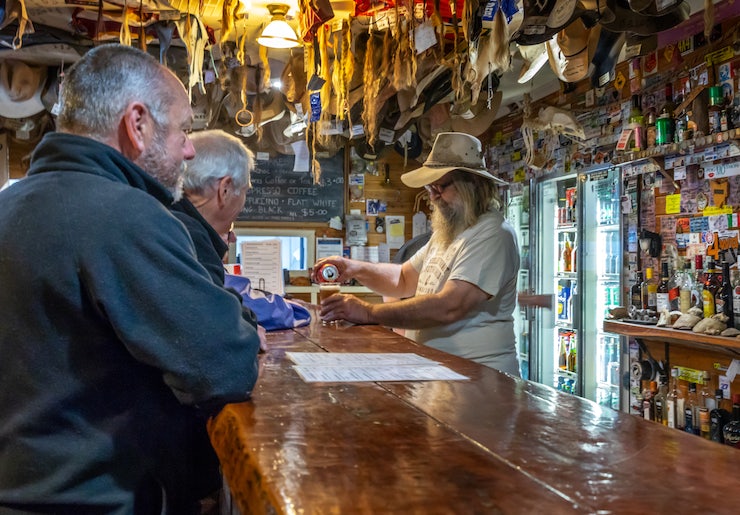 Leaving Mungerannie we travelled alongside the Naterannie Sandhills as the Tirari and Strzelecki Deserts merge.  The dunes here as in the Simpson Desert are long and narrow, pale orange to red in colour with large open areas in between. They run parallel to each other for miles and miles. (yes I know it’s kilometres these days but that just doesn’t have the same flowing ring to it, “kilometres and kilometres”…pfft. )

A relic of the 1949 flood, the punt MV Tom Brennan sits on a rise alongside the track.  The punt was provided by Dalgety & Co Ltd to ferry supplies and mail across the Cooper Creek that year.  Now if/when the Cooper floods a detour track takes travellers to a ferry that operates when required in daylight hours.  The ferry was definitely not needed this year. 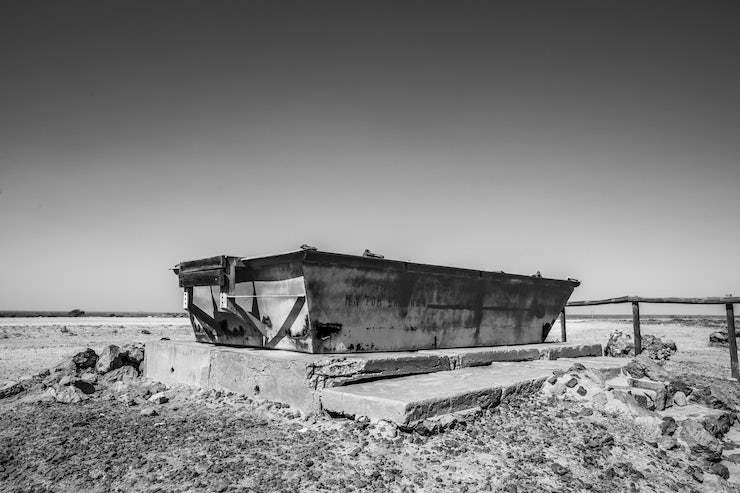 In the midst of so much desert it is surprising when a waterhole comes into view almost as if a mirage.  These water holes are a string of artesian bores that tap into the Great Artesian Basin far below the surface.  The Great Artesian Basin underlies around 22% of the Australian Continent and is diffused either as natural springs or through bores.  These water points are vital to the pastoral industries along the track and also to the survival of native fauna. We even photographed a lone Ostrich at one of them. 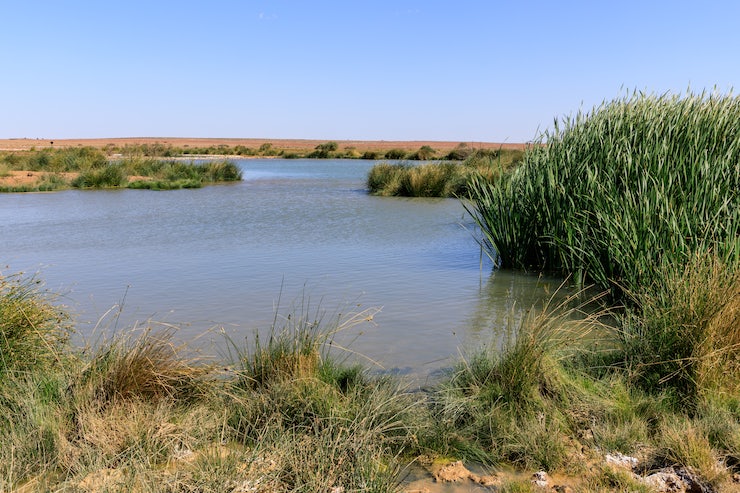 One of the most enjoyable artesian bores is the one at Clayton Campground where the station owners have provided flushing toilets, hot (artesian) showers and a “spa bath” for weary travellers all for a $10 / vehicle donation.  We jumped in with a few others for a long hot soak, a good moan about politics (Turnbull ousted) and reminded ourselves that in ancient times people paid handsomely to “take the waters”.

The ruins of Lake Harry Homestead and others along the track are a reminder of shattered dreams in a harsh country.  In this case it was a failed date plantation where 2,000 date palms were planted and irrigated.  There are several other ruins along the track. Mostly constructed of stone and mud, there is occasionally an odd wall but usually only the fireplace and chimney remaining.  Life here in the early 1900’s must have been incredibly difficult especially in the summer months where temperatures hit the high 40’s and beyond. 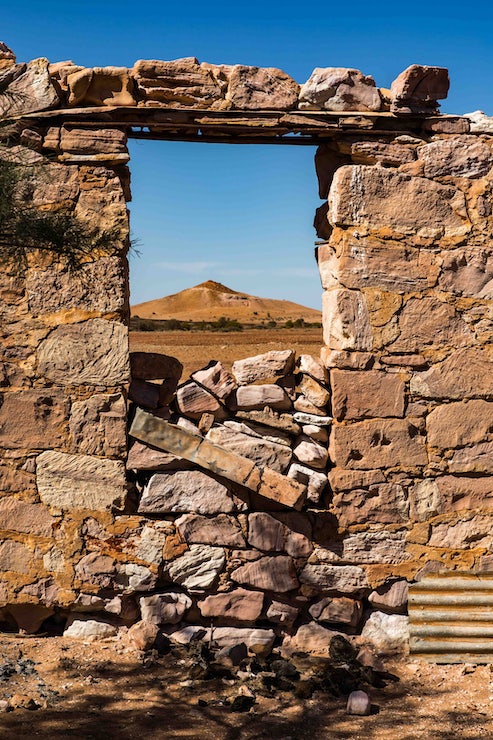 The multicultural town of Marree marks the end of the Birdsville Track.  Formerly a base for Cameleers and an important stop for the Ghan Railway, Marree now relies heavily on the passing 4 Wheel Drive trade.  It is also at this junction where the Birdsville and Oodnadatta Tracks meet so it’s a busy spot in outback terms.  We took time to catch up with one of Australia’s leading landscape photographers Julie Fletcher who is based here in Marree. Her photography brilliantly captures the essence of this region so if you have the chance, check her work out when travelling through, it is on display at the Marree Roadhouse.

Just 50 kilometres south of Marree are the ruins of the once thriving settlement of Farina. Restoration work is being undertaken on several of the buildings that made up this important railway and station service town.  Volunteers work to maintain what is left and donations from the nearby camp area contribute to fund the work effort.  The cemetery is one area to have been restored and the list of names and ages of those buried is testimony to a hard and difficult life. 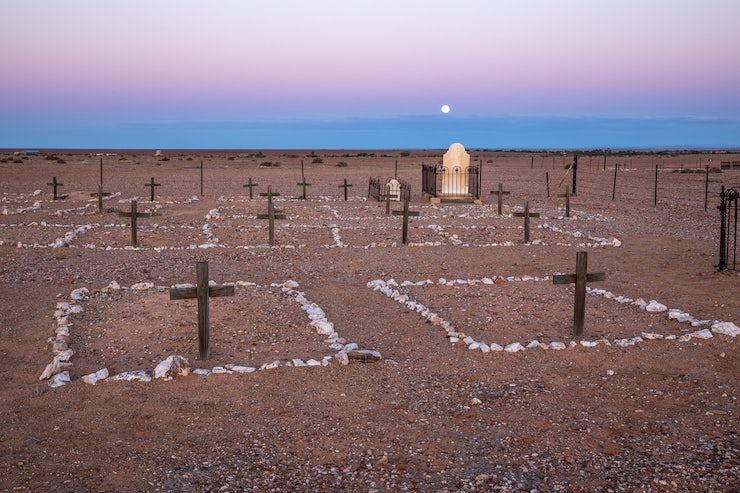 Our 4 ½ month journey had come to an end, work, family, LIFE commitments were calling so we decided on dining out with a celebratory meal and glass (or two) of wine in the wonderful Prairie Hotel at Parachilna.  The hotel is famous for its “Feral Platters” of camel, goat, emu and kangaroo delicacies.  It is a favourite destination for visitors to the Flinders Ranges and while we only spent an afternoon cruising the Flinders this time, it was a fitting end to our 2018 travels across what is, without a doubt, THE greatest country on this planet. 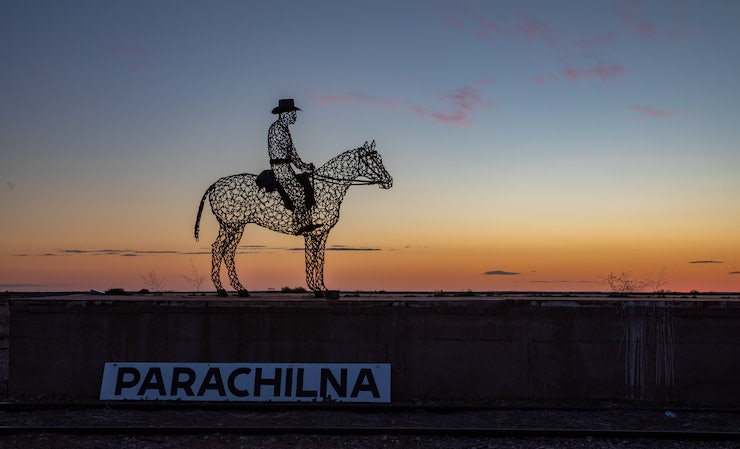