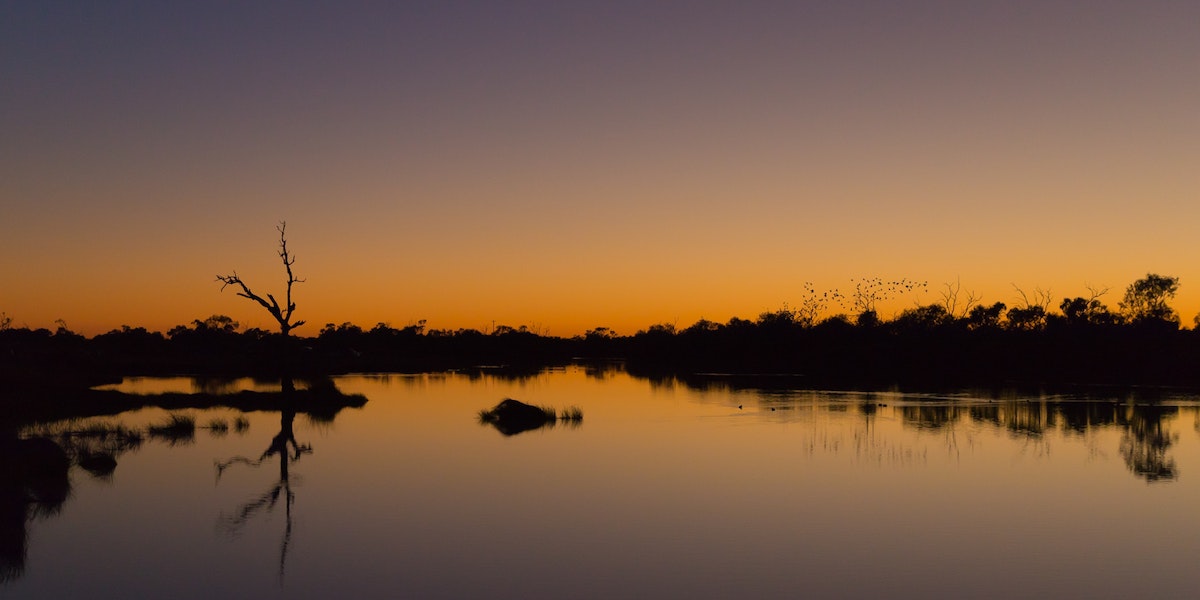 From Min Min Lights to the Dusty Diamantina

Are they a natural or supernatural phenomenon? Maybe an interplanetary portal tempting or luring those who witness them to an alternative galaxy that’s the question?  Either way stories abound around the small town of Boulia in Western Queensland from people who have seen these fuzzy disc shaped lights known at Min Min lights that appear out of nowhere to sometimes follow and other times lead.

We went in search of the Min Min Lights on the banks of the Burke River at Boulia where we camped for two nights on our way south. When we were not successful in seeing them at the river, we called in at the local Visitor Information Centre and saw them through the excellent interactive display instead.  This tiny town of just 300 people offers a walk through exhibit taking visitors on a trip from the pub to station country then out onto the highway at night and even to the cemetery to hear from those who have seen the lights.  If you are passing through it’s a “must do” experience. 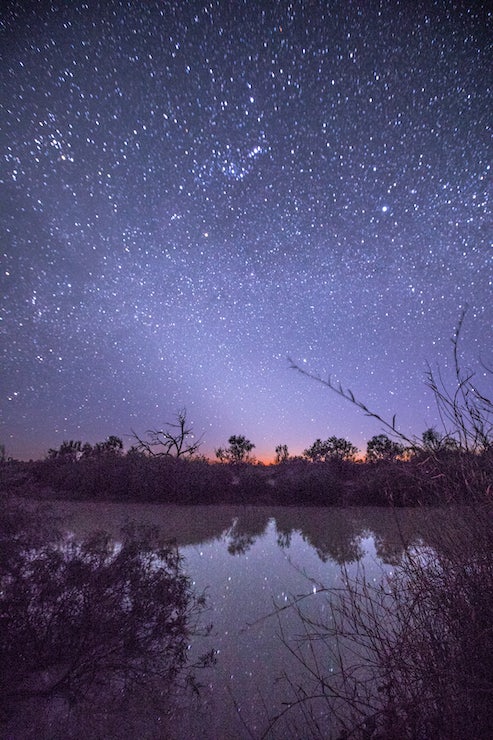 Looking for Min Min Lights - we only found stars

Boulia offers several other interesting tourist activities.  The local museum has an amazing display of Marine Reptile Fossils, in a temperature-controlled room, from the Cretaceous Era when Boulia was part of the inland Eromanga Sea.  It’s hard to believe that the fossils are real but they are and the detail is amazing. The same museum has old farming implements on display and an old stone hut that gives a hint to the challenges of life in the pioneering days. 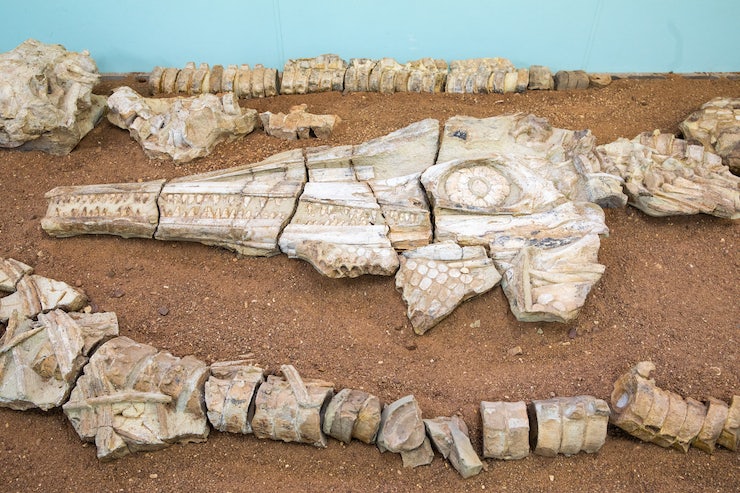 On the road again and passing through Bedourie we were not tempted by the thermal spa and pool although others who stopped here declared it to be excellent.

The Diamantina Region is one that typifies the lines of Dorethea Mackella’s poem My Country, when she talks of: “A land of sweeping plains, of rugged mountain ranges, of droughts and flooding rains”.   Also called the Channel Country it’s obvious that when the monsoon rains do fall this country would quickly flood and as that water receeded would just as quickly bloom into life.  This trip, the situation is that there has been no significant rain for the past three years and the land is dry and barren.  We can relate to John Williamson’s, “The rain never falls on the Dusty Diamentina”.  There is however, still water. 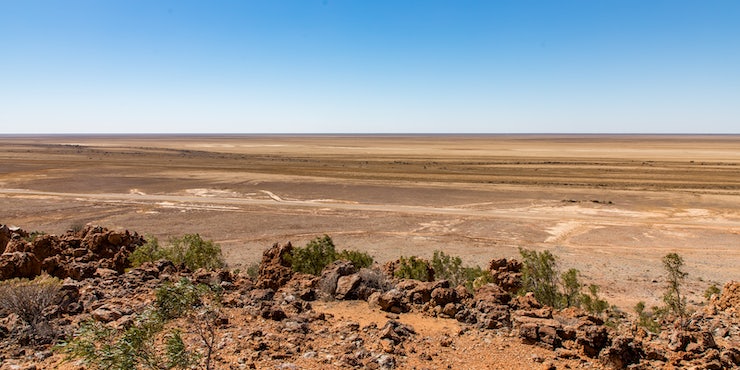 Sweeping plains of the Diamantina Region 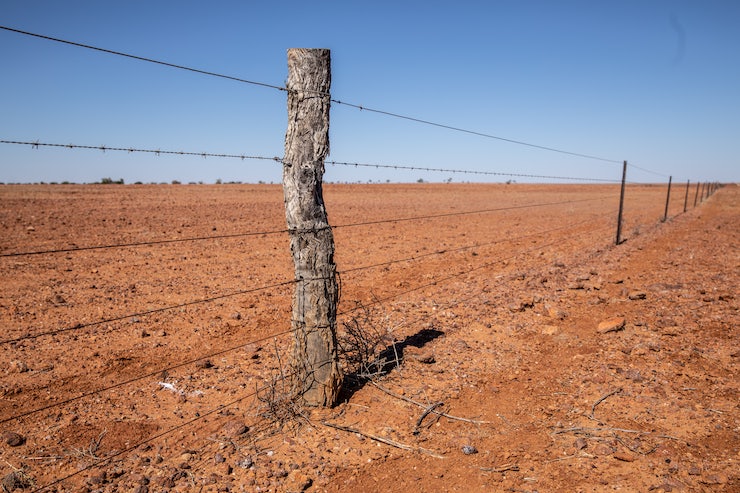 With no substantial rain for three years, the area is in drought.

We camped for two nights on the banks of the Eyre Creek at Cuttaburra Crossing. It never fails to amaze us that in the midst of what must be some of the most barren country in Australia that there are these stunning small oasis that are a nature lovers delight.  The Zebra Finches were busy nesting and we spent hours watching them to the overhead cries and shadows of the ever-present Whistling Kites. Terns, White Necked Herons, Corella, Galah, Pelicans and a couple of birds we had not seen before, White Winged Triller and a Western Bower Bird just popped in and out for a drink as we sat and enjoyed their visits. 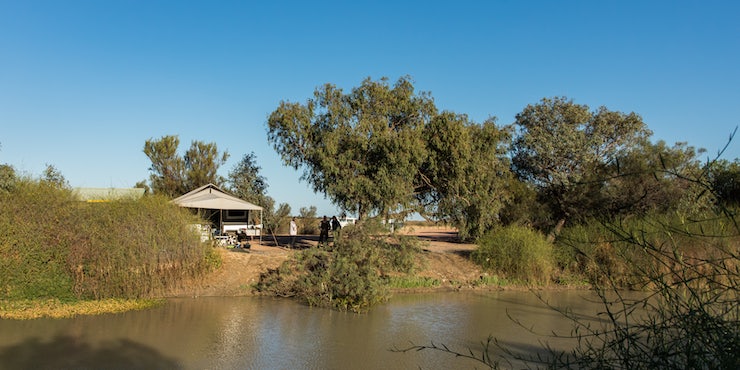 Even in the driest areas we found oasis. 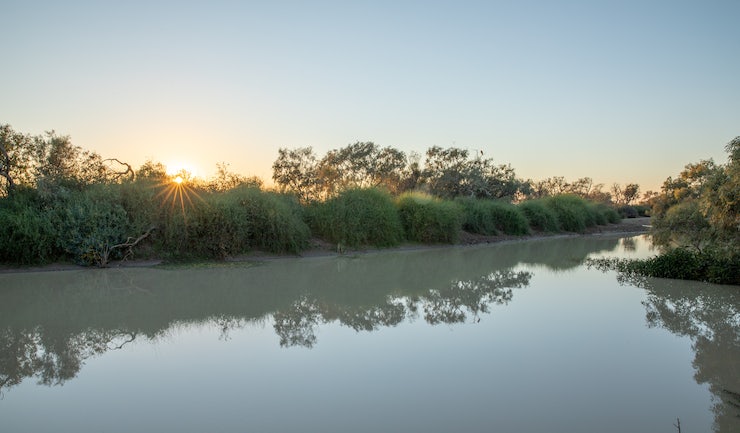 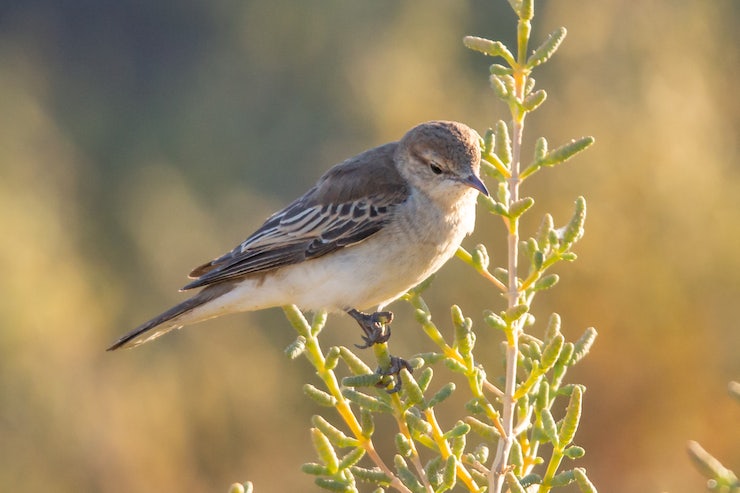 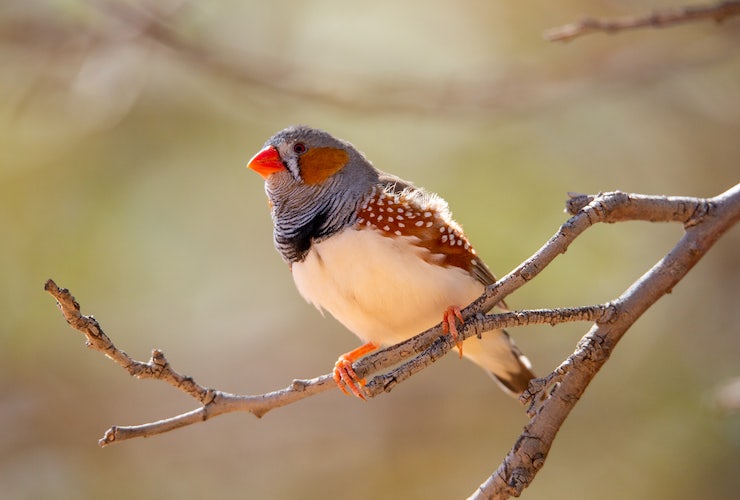 At night we shared a camp fire and a meal with fellow travellers Doug and Pauline, enjoyed the sunset and as the light slowly faded, enjoyed the moonlight and stars. It really is the best part of camping out.

Just down the track at Carcoory Bore, we watched in fascination at the steaming hot water bubbling up from 800m below the ground then spilling through a series of small ponds to a long, reed lined, Coolibah Tree shaded creek.   Carcoory Station including the homestead, (now a ruin) was purchased by Sydney Kidman around 1900 but three years of successive drought saw him close the property down. 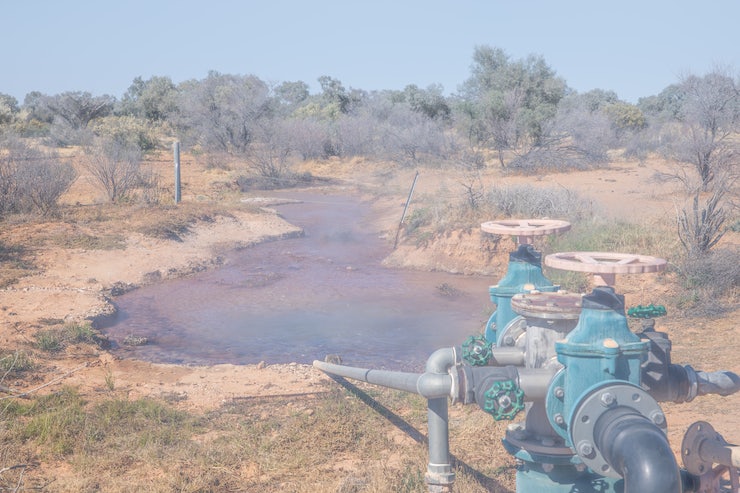 Steam rises from the bore where the water is at 85C 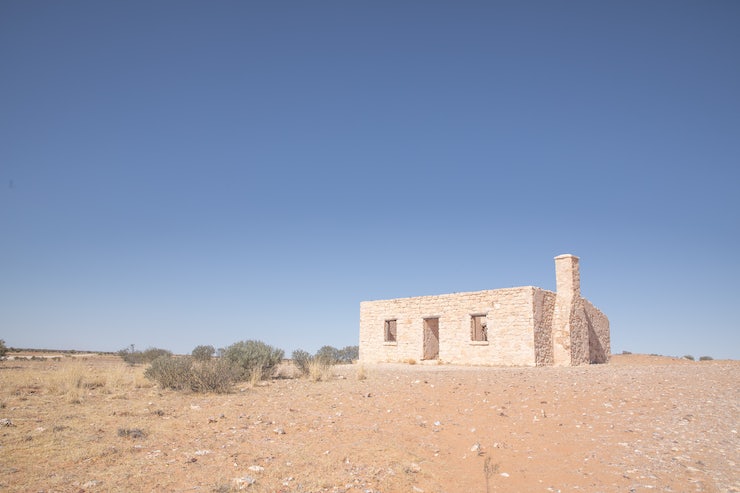 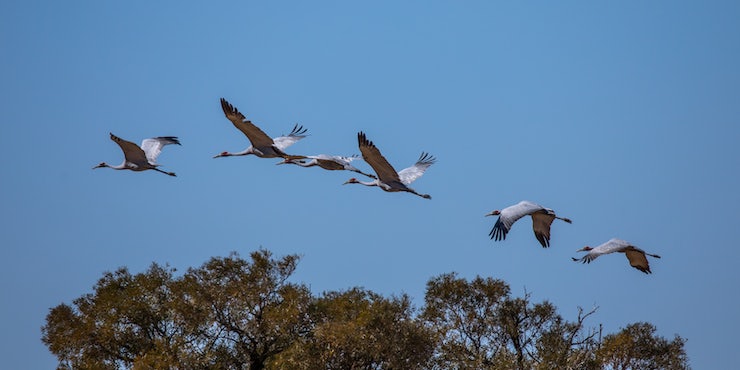 Brolga take flight near the stream that flows from the Bore

Travelling through Roseberth Station en route to Birdsville, we applauded the humor of the owners who have marked various station roads with an array of household items:  a television and lounge set up at one, an outdoor garden setting at another then a shoe rack complete with work boots a little further along the road. 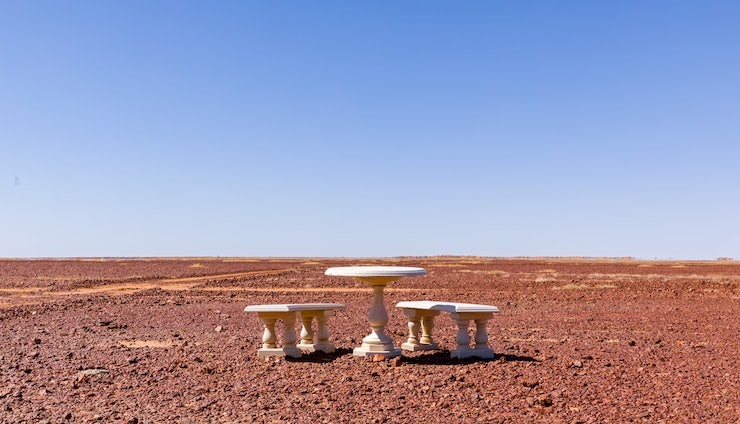 A unique way to mark a station road.

Driving into Birdsville we were struck by the improvements to the town since our last visit in 2001.  The town was in full preparation for the iconic Birdsville Races just a week away (first weekend in September).  Campers were already arriving, most choosing to stake out a free camp on the banks of the Diamantina River just outside of the town limits and conveniently half way between the pub and the racetrack.

The caravan park had at least doubled in size although it is still dry and dusty. We settled on an unpowered site on the banks of the lake.

A new Bakery offers delicious breakfasts, sensational pies and pastries, coffee, alcohol but no vanilla slices.  A roadhouse and hardware store cater for pretty much whatever else you might need. 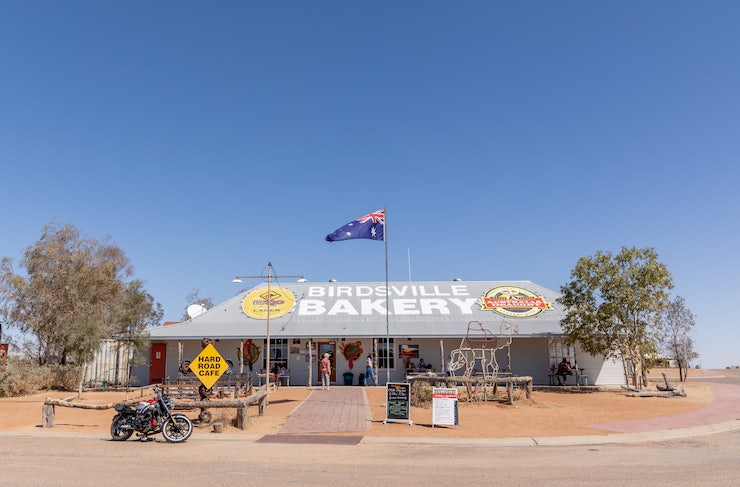 The Birdsville Pub is perhaps the best-known landmark of this small outback town and was still much the same as we remembered it.  We spent a terrific night their with friends Doug and Pauline who we met at Cuttaburra Crossing and were introduced to local identity Jimmy through them. 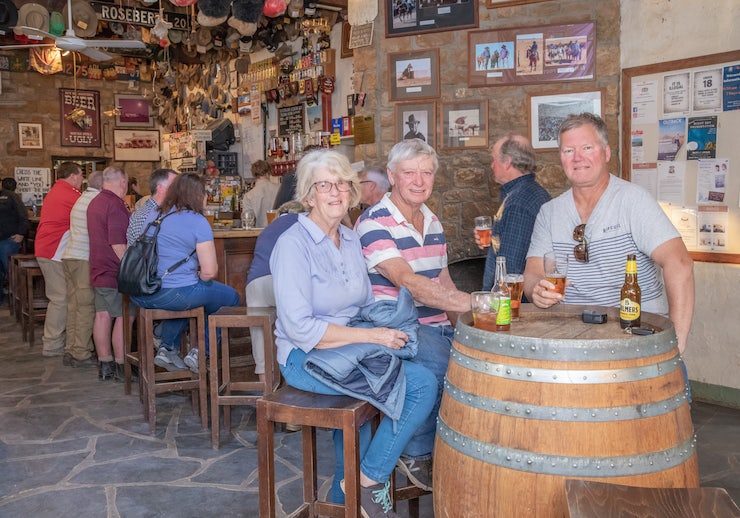 Pauline, Doug and Bazz in the Birdsville Pub.  (Donation to RFDS for photos taken in the pub)

Jimmy Crombie belongs to this land, he is a Wangkangurru Man, one of three remaining who were actually born on the banks of the Diamantina River.  Jimmy used to work on the Stations with Doug’s mate who has since passed away.  He has retired from station work now but keeps himself busy by making sturdy leather belts that he sells in the Pub for $50.  When asked what he would consider a good sales night, he replied “If I can sell one, I’m happy”.  It was a bumper night for Jimmy, he sold four and a couple more to us when we caught up again the following day. 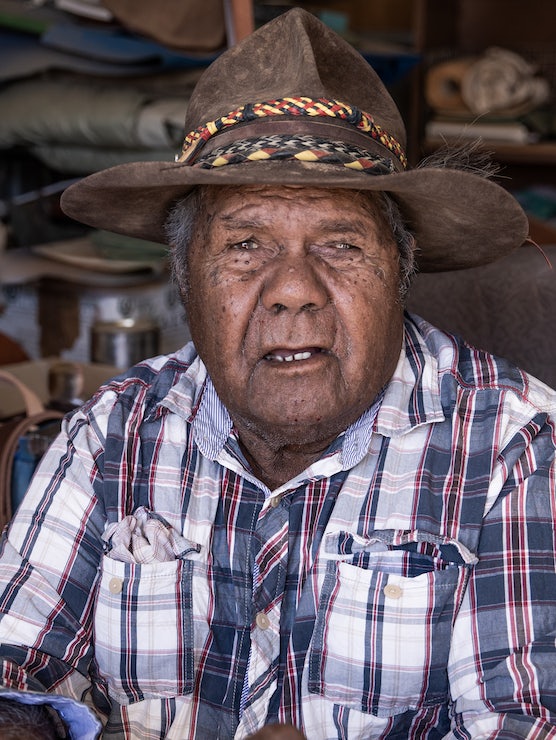 No visit to Birdsville would be complete without a trip to Big Red on the edge of the Simpson Desert.   Big Red is the first dune encountered travelling east-west or the last if travelling west-east and standing 40 metres in height it’s the most challenging of the 1140 dunes that make up the Simpson Desert.  We watched as two vehicles towing camper trailers successfully reached the top from the east (that’s the easier way) and then were entertained for an hour or so while two 4WD’s unsuccessfully attempted to get over Big Red from the west.  The smell of burning clutch plates added to the drama of the bumpy run up, high revving motors and the red sand shooting off the spinning tyres like water sprays out of a split hose. Eventually in the interests of getting their vehicles home they took the detour. 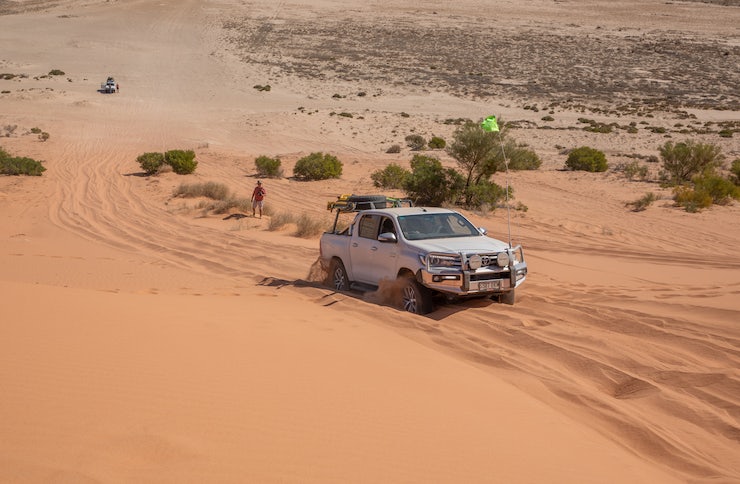 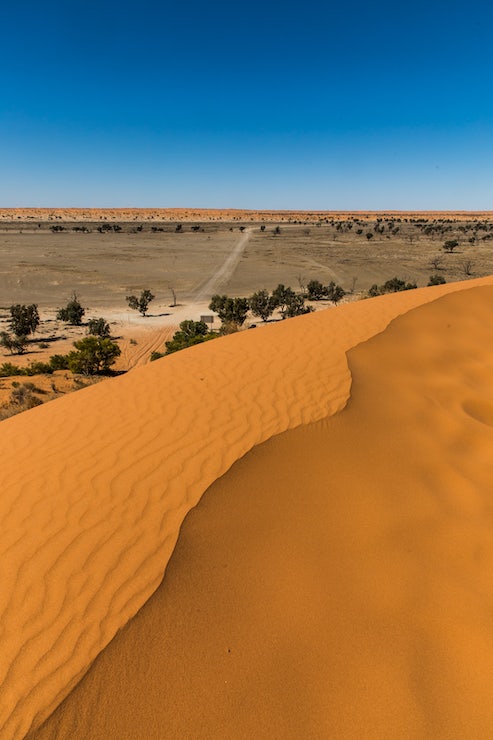 After three nights it is time to farewell Birdsville and head home via the Birdsville Track.