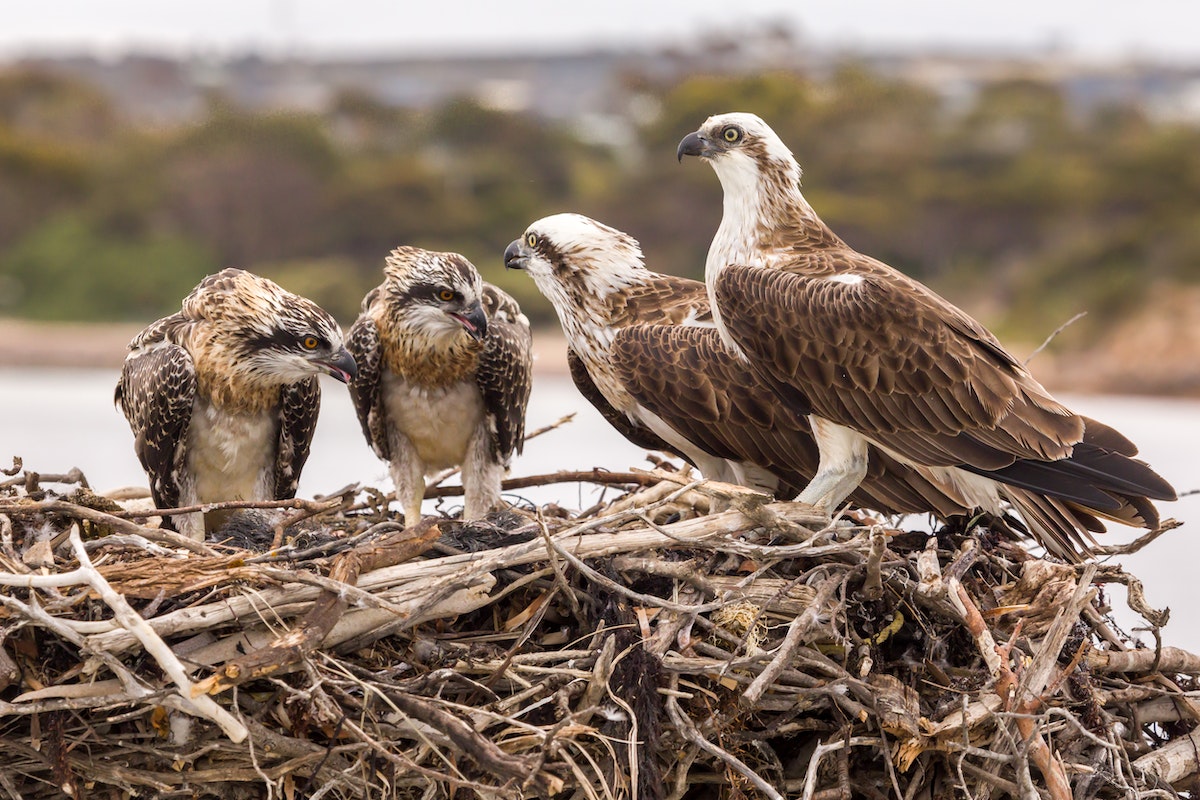 Eastern Osprey (Pandion cristatus) are listed as endangered in South Australia.  Very little is known about these amazing birds and they are considered to be indicators of the health of the environment so its imperative that we know more about them. 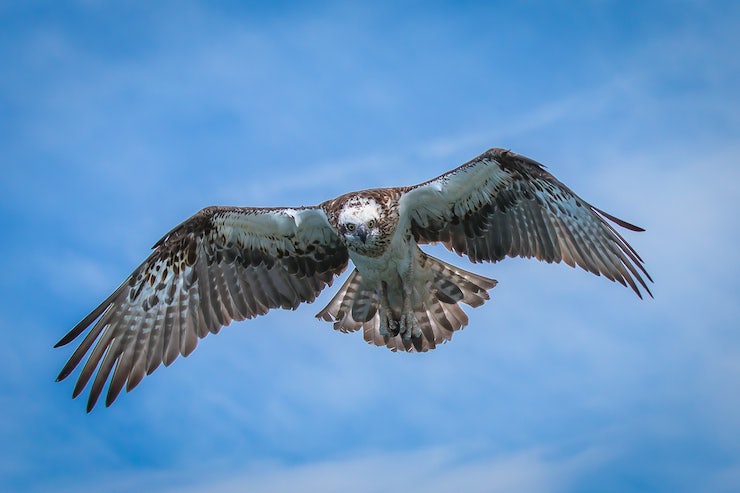 Female Osprey returning to the nest

History of the Nest

Since 2010 a pair of Eastern Osprey have nested on a barge in Proper Bay, Port Lincoln just near the entrance to the Lincoln Cove Marina.  Fearing that the barge was falling into disrepair and would soon have to be removed thereby destroying the nest, Calypso Star Charters purchased the barge in order to protect this important nest.  What they then discovered was that the barge was slowly sinking. The company then secured a second barge and when the birds left the nest in 2014, the nest was carefully removed from the old barge and installed on to the new one – no mean feat when you consider the dimensions of the nest. 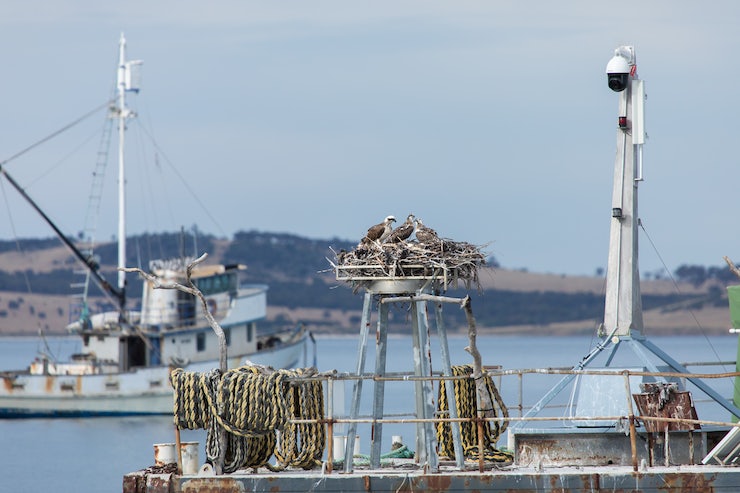 The nest on the second barge with security camera in place

In the past 3 years there have been three successful fledgings from the nest (one per year) and presently, in 2018 it appears all is on track for the two current chicks, Layla and Flinders, to fledge in the coming days.

Take 2 Photography have been involved in the past two seasons as observers and recorders of life at the nest. IBeing exposed to the daily activities of these birds in this totally unique setting has developed within us a deep passion to learn more about the osprey and to promote the need for more research and assistance directed toward the protection of Eastern Osprey on Eyre Peninsula.

·     The Eastern Osprey is a large (50-65 cm long) hawk. It is brown on the upperparts and white on the underparts, with a pale head, dark line through the eyes, mottled brown “necklace”, barring under the wings and tail, and bare grey legs.

·     Females are larger than males and their necklace is more pronounced.

·     It is impossible to tell the sex of fledglings other than by a blood test.

·     Ospreys have long legs for reaching into the water and dense, oily plumage. They also have special valves that keep water out of their nostrils when they dive for fish. Osprey feet have spiny footpads called spicules, long, sharp claws, and a toe that can be turned backward for holding on to slippery fish.

·     Osprey eyes can see long distances; the nostrils are long and slitted, and capable of closing during dives. The beaks and talons grow continuously to compensate for the wear and tear during hunting. The osprey's talons are capable of snapping shut within two hundredths (2/100) of a second

·      Besides the courtship call of the male, the osprey vocalizations have been classified into three main types: Guard calls; Alarm calls and Begging calls which are emitted by the females during the breeding season.

·     Generation length is estimated as 10 years for similarly sized raptors. 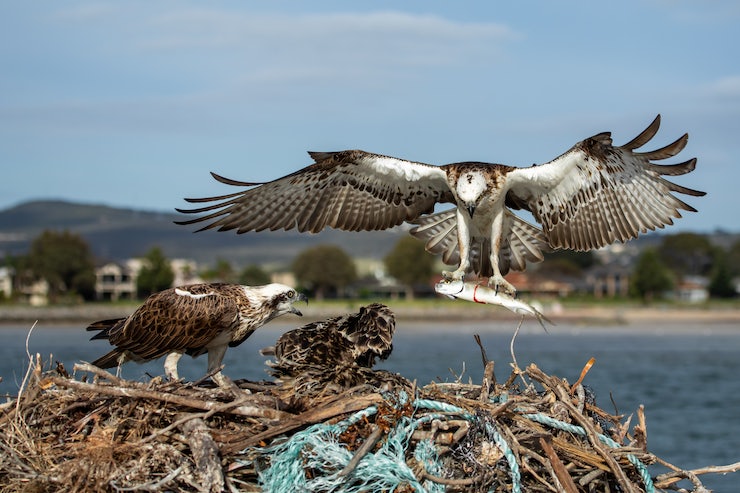 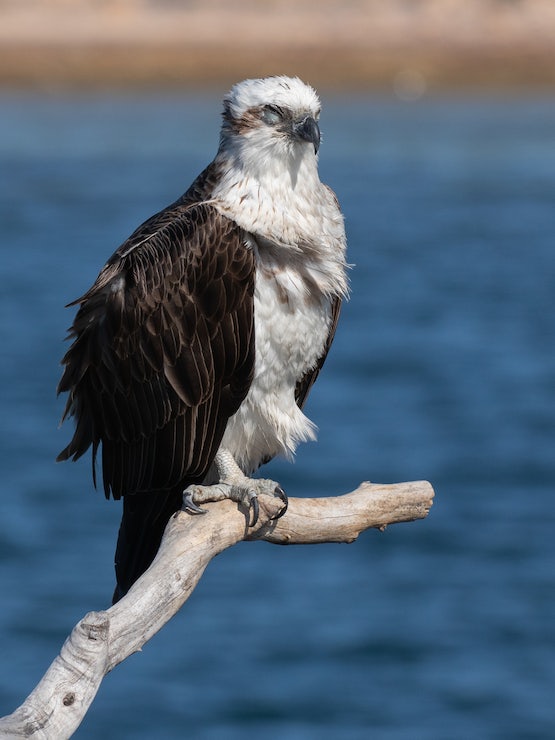 Male takes a break while the chicks feed 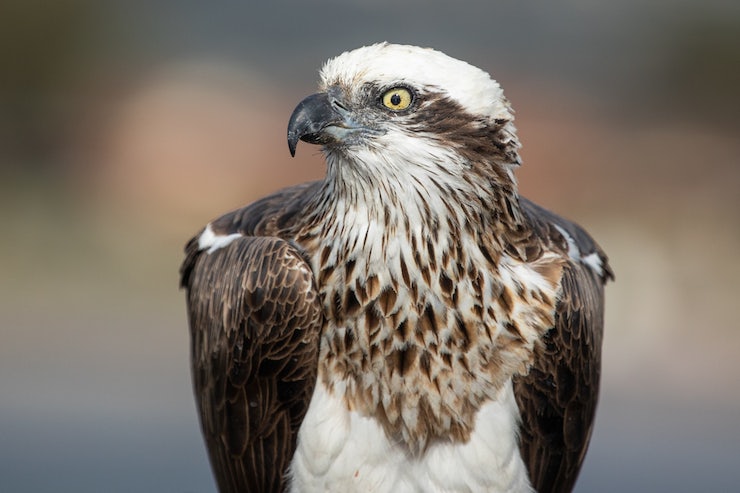 Females have a darker "necklace" of plumage to the males.

·     The Eastern Osprey breeds from March/April to September in Australia, typically in monogamous pairs. In general ospreys start to breed around 4 or 5 years of age.

·      In South Australia they nest on coastal pinnacles and tall usually dead topped trees.   They are increasingly seen making use of artificial structures for nest sites.

·     Where there is more than 1 chick the second and third chicks leave on average 1.6 days and 3.8 days after the first one.

·     The male continued to provide fish to the nest while the fledglings are in the area and do not promote fledgling independence by stopping fish delivery to the nest.

·     Fights between siblings over food are common.

·     Fledglings have been observed fishing but with limited fish.

·     A female osprey is usually fed exclusively by its mate between pair formation and egg-laying. 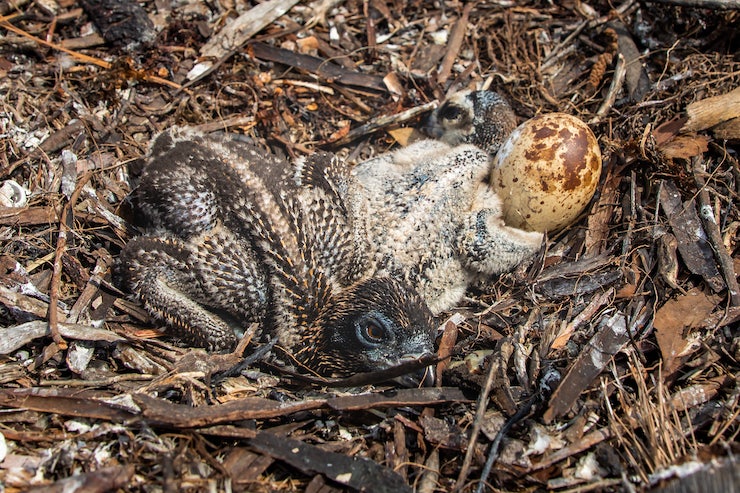 2018 Chicks and the egg that did not hatch - damage to the egg is visible.

·     Ospreys are unusual among raptors for being almost solely fish eaters. Ospreys have several adaptations for hunting fish.

·     Occur solitary, in pairs, or family groups of parents and dependent juveniles. 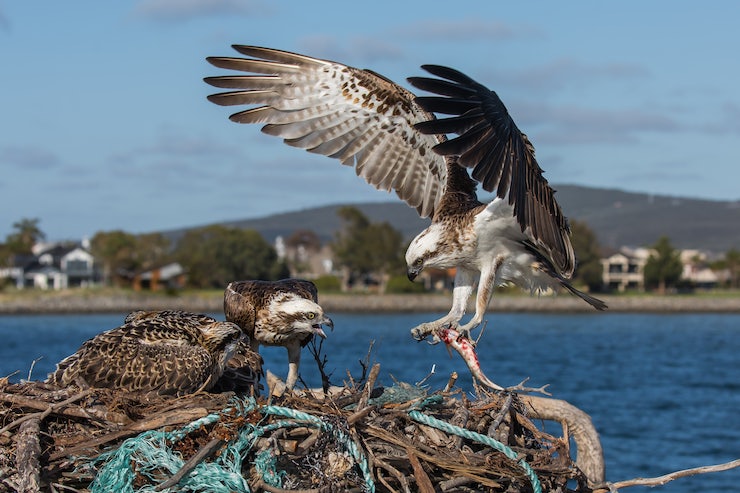 ·     Worldwide distribution.  They live on every continent except Antarctica.

·     Breeding Osprey will travel as far as 14km from the nest during hunting forays.

·     Defence of territory begins about a month before breeding.  The core area is approx. 150m

·     Highly mobile and dispersive, with known movements of dispersing juveniles of up to 700km.

·     There does not seem to be reliable data on the current population of Eastern Osprey in South Australia. 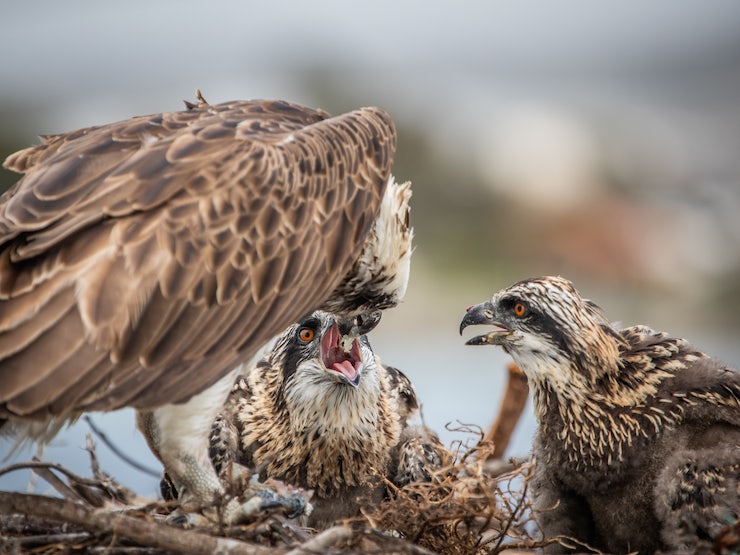 Chicks are fed in turn by the female

·     Loss of breeding habitat and nest trees, pollution of foraging habitat and prey with agricultural and industrial chemicals and entanglement in fishing gear. 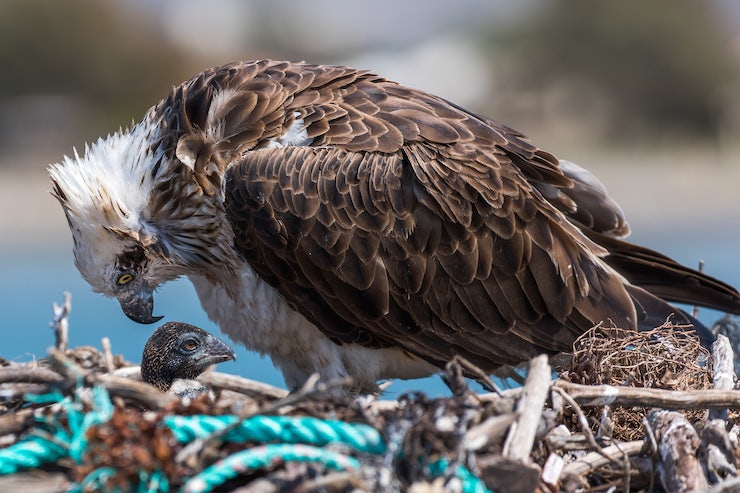 ·     Eastern Ospreys are recognised indicator species by which to measure wilderness quality and environmental integrity in a rapidly changing world. They are good indicators of the health and abundance of the fish stocks they hunt. Ospreys act as canaries in a coal mine, warning us of the impending environmental hazards.

What have we Learnt?

Volunteers document life at the nest from the arrival or the adult birds each year through to when they leave the nest after the juveniles have fledged and can fend for themselves.  Activities observed and recorded include: refurbishment of the nest for breeding; courtship and mating rituals; egg laying; hatching and the growth and development of the chicks including their first tentative "lift-offs". These activities are all observed through the 24 hour security vision and noted.

Observations have been made about how long after mating the eggs are laid, when they hatch and how far apart which has helped observers to determine if an egg is not viable which egg is it (1st, 2nd or 3rd laid).  In 2018 observations showed that the second egg laid was damaged in the nest and not viable.  This may have been due to being cracked with a stick during nest building activities.

Fighting between the chicks has been observed and in 2016 two chicks were killed before they were two weeks old by the eldest chick.   In 2017 the first laid egg did not hatch and was broken in the nest the last born chick was almost ready to fledge when it was tossed out of the nest and into the ocean by its older sibling. The fight was observed on the security monitor and a rescue was made with the chick being sent to a Raptor Park on Kangaroo Island.  The Chick (Stevie) contracted a lung infection and died some months later.

What don’t we know

. Their range from the nest over periods of time.  We know they stay close by for some months but just how many months and then where do they go?

·     Where they are hunting and what fish they are catching.

·     Eastern Osprey are thought to be in decline in South Australia however there is evidence that there have been 3 birds fledge from this nest in the past three years, two more will fledge this year and yet we lose all hope of knowing more about their movements once they fledge. While there may be chance sightings they can not be positively identified.   There are at least 3 other active nests that I know of within 100km.  So how many individual Eastern Osprey are there in the area.

·     What are the mating outcomes for the birds. 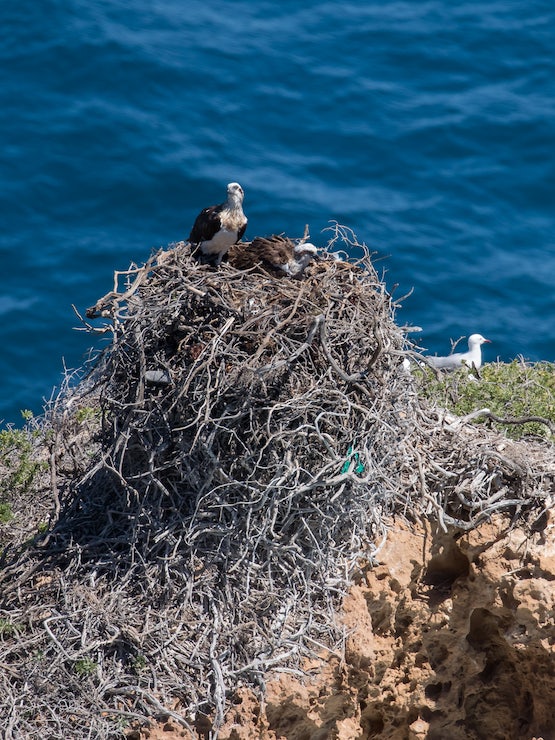 Ospreys nesting at Kiana approximately 110km from Port Lincoln...How far do Ospreys range from their nest?

Where to from here

Currently all information about the birds stops once they leave the nest.  It is not known where the birds (juvenile or adults) go when they leave the nest for the season. The observers believe that the 2017 fledgling remained in the Lincoln Cove Marina area for around 12 months but it is hard to be certain because the only method of identifying an unbanned bird is by recording and matching the iris pattern of the individual bird. 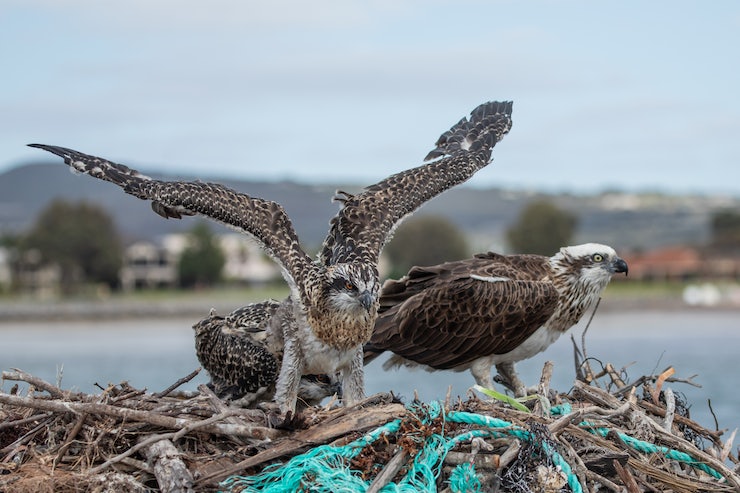 As the 2018 Osprey chicks test their wings and prepare to fledge we know all information about them will stop as we can not get approval to band or track them.

Nationally 425 Eastern Osprey (Pandion Cirstatus) have been banded since 1961 the most recent being December 2017.  Of that total 276 bands were recovered and 201 resighted.

Approval is being sought to band the chicks so that more information can be added to the knowledge base for Eastern Osprey in South Australia.  This request has been met with a long list of requirements including identifying an A Grade Licenced Bander experienced in banding Raptors. Currently there is no one in South Australia who has that licence.

Calypso Star Charters and Take 2 Photography along with other supporters will continue to lobby for more attention to be paid to learning about Eastern Osprey so that they might one day be able to be removed from the “Endangered List” we would love you to follow the journey through the facebook page which has a link here.