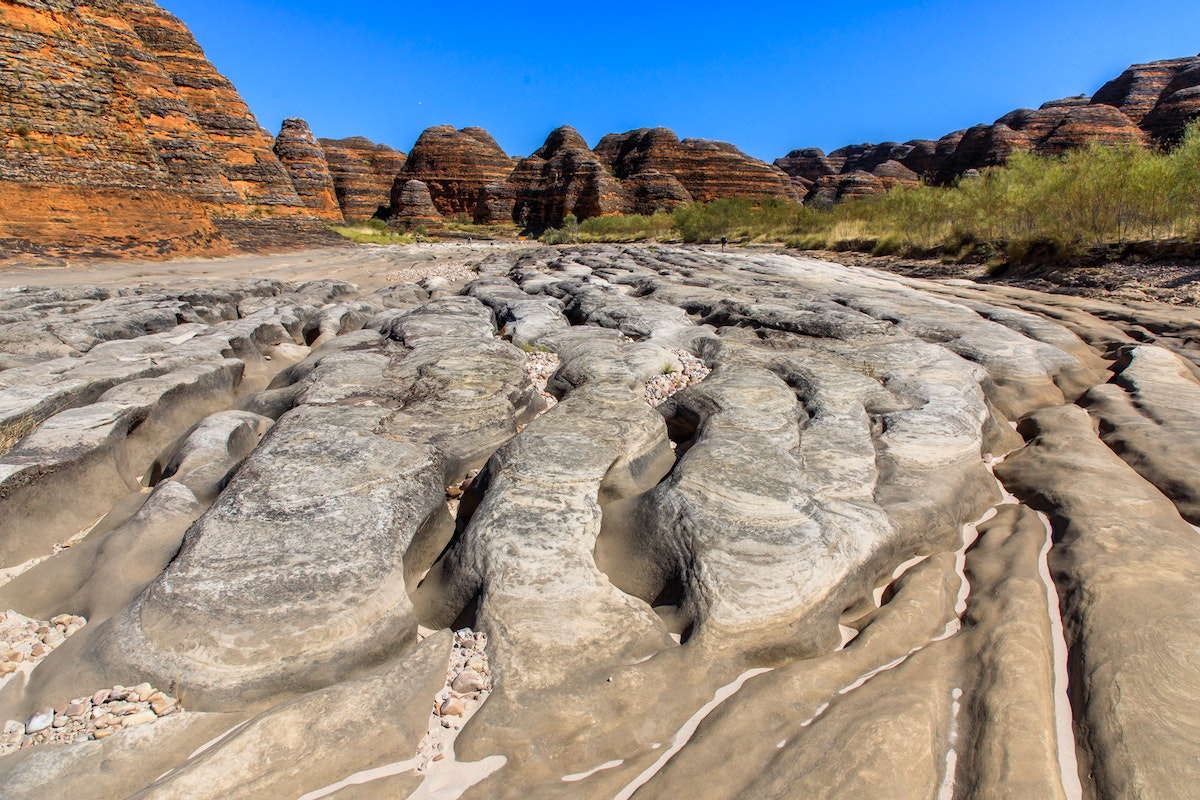 As we approached the domes of Purnululu, neither of us spoke and only the sound of the car cruising across the dusty gravel road broke our stunned silence such is the impact on first sight of these incredible, unique landforms.

It was our second attempt to visit Purnululu (the Bungle Bungles). Twelve years ago a deep water crossing frustratingly stopped us from getting into the park and it has been a destination we vowed to return to ever since. 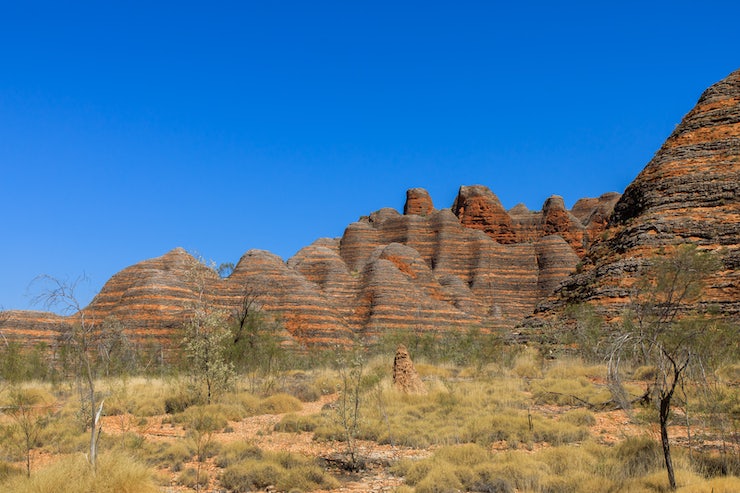 Traditional ownership of the land is subject to a dispute between two Indigenous groups but undoubtedly the area has been significant to Aboriginal people for more than 20,000 years.  The first white inhabitants came to the area looking for areas to graze cattle.  It was not until a film crew returned with footage of the Sandstone banded domes in 1987 that the Western Australian Government recognised the geological significance of the area and declared it a National Park.  World Heritage Status followed in 2003 due to the area’s sensational natural beauty and its geological value.

The turn off to Purnululu National Park is 108 kilometers north of Halls Creek or 250 kms south of Kununurra.  Then there is a stretch of 53 kms of what has been referred to as “the worst road in Australia” from the turn off from the Bungle Bungle Caravan Park at Mabel Downs Station to the Visitors Information Center.  The road is extremely dusty, some parts badly corrugated. It’s littered with tyre destroying rocks, is hilly with dozens of s-bends and has a few creek crossings thrown in for good measure.  We were fortunate in that the grader had been along the entrance road and the southern section of the park a week earlier but the northern section was living up to it’s reputation and was corrugated, blindingly dusty and just bloody rough.    The state of the road probably accounts for the fact that many visitors to the park come by tour bus or they fly over.   Both options are available from the Bungle Bungle Caravan Park.

Kurrajong Camp ground at the northern end of the park was our base for the first two nights.  It’s a lovely shaded campground with plenty of good-sized sites and the source of constant amusement of International visitors, the long drop dunny.  From Kurrajong we explored the gorges and walks at the northern end. 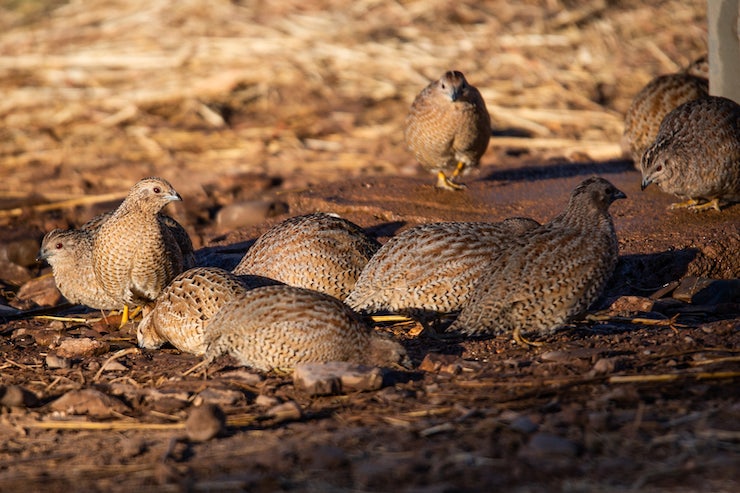 Echidna Chasm was a firm favourite.  It is a 2 kilometre walk to a 200 metre chasm.  The track winds up from the car park over the rounded pebbly rocks of a dry riverbed. At the entrance to the chasm, Livistona Palms and dry rainforest flourish in the shaded areas and provide a stark contrast to the towering orange cliffs.  The chasm itself winds its way past a large chamber into smaller areas, at times just one person wide.  At each turn the reflected light had us marveling at the colours and textures painted over a giant geological canvas. 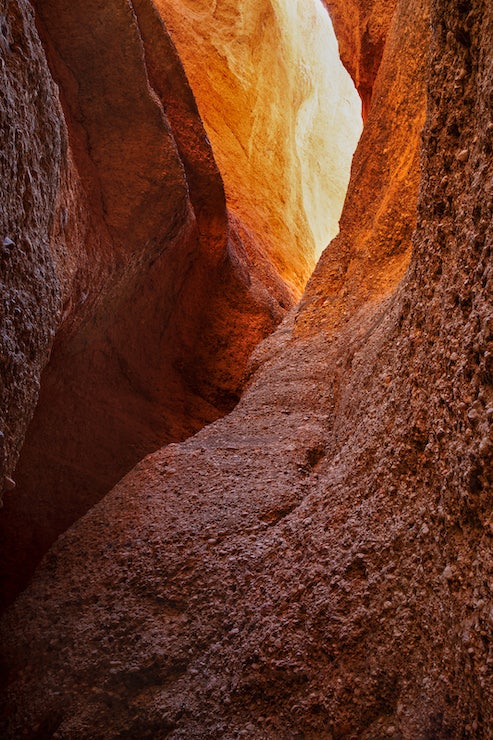 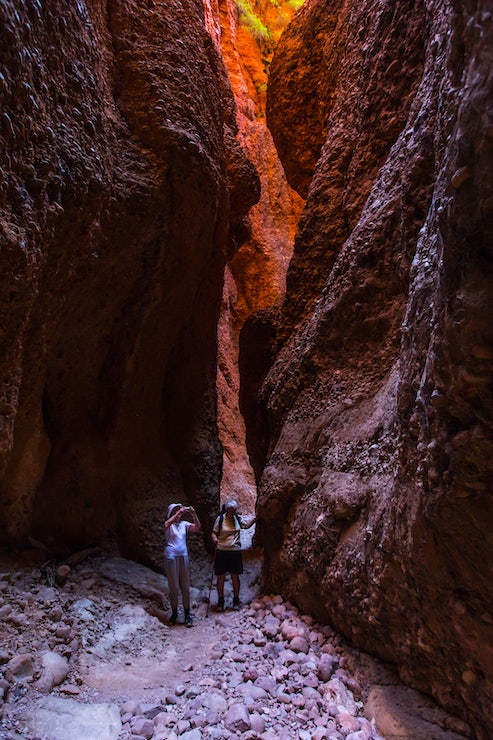 Mini Palms Gorge is a longer walk (4.4 kilometres). It is a little more challenging (grade 4) as we squeezed past and scrambled over large fallen conglomerate rocks.  At the final destination of two viewing platforms we took a while to marvel at the natural amphitheater in front of us and the beauty of the gorge and vegetation we had come through. 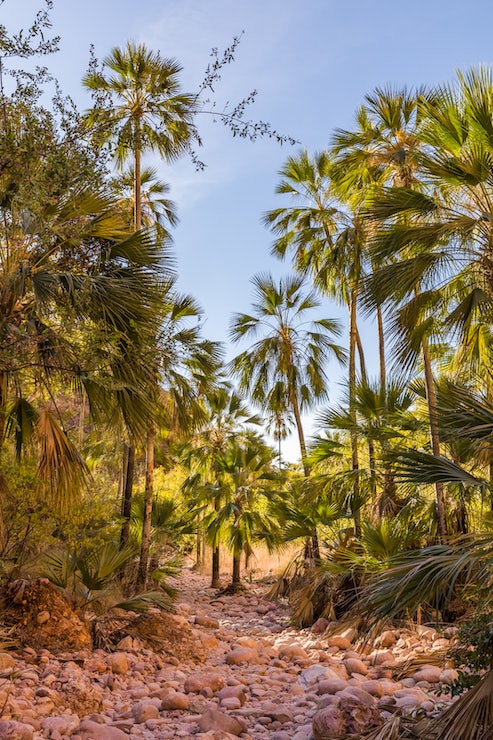 Later that same day, we watched the sunset with a small crowd of fellow travellers from Kungkalanayi Lookout.  As the sun sinks the escarpment glows a deep red and the sky turns purple and pink, (the bands of Venus).  Staying after sunset we waited for the milky way to rise in the east and on a dark night with no light pollution it was certainly worth the mossie bites to witness the night sky in all it’s glory. 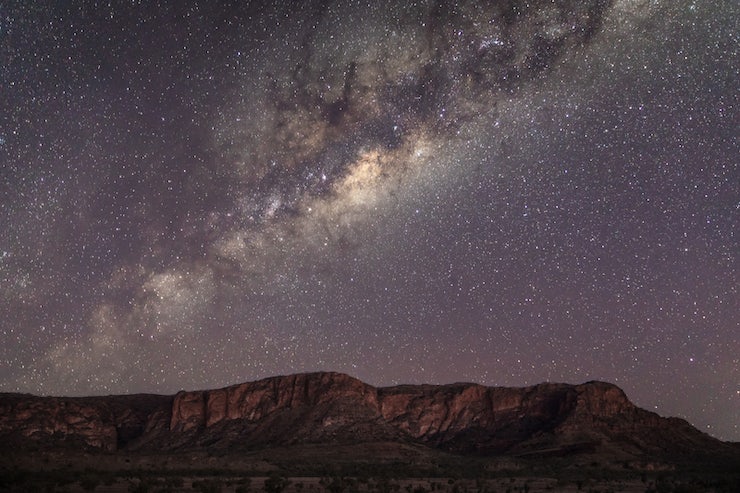 Still in the north the trail from Bloodwood Lookout to Echidna Gorge was an easy walk winding through rock formations past spinifex flats dotted with Bloodwood and Snappy Gums that are a feature of the landscape.

Typical landscape in the northern area of the park

Moving to the southern camping area “Walardi” we were directed to a fabulous camp-site on the banks of a dry creek by Robyn the Camp Host and invited back to sit by a water hole at her camp to photograph some of the birds which come to drink. We realized that two nights here would not be enough to see all we wanted to see, so made the 20km return trip to the Visitor Centre to book a third night.  Staff at the Visitor Centre informed us “all bookings must be done online” - yes, we had done that but now there was no coverage so it was impossible to extend.  Eventually they took pity on us and did an online booking on our behalf.  Now when it is peak tourist season for the Kimberley the camps are actually no-where near full and it was suggested that the requirement to book on line contributes to this situation.

Bird life around the camp and at the host’s water hole was abundant and entertained us after the walks each day.  We particularly loved the scurrying antics of the brown quail, the gregarious double barred finches and the majestic blue-winged kookaburra. 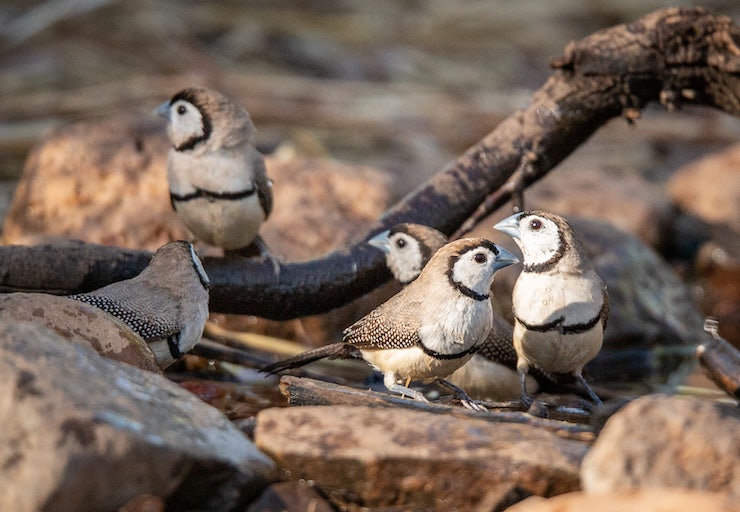 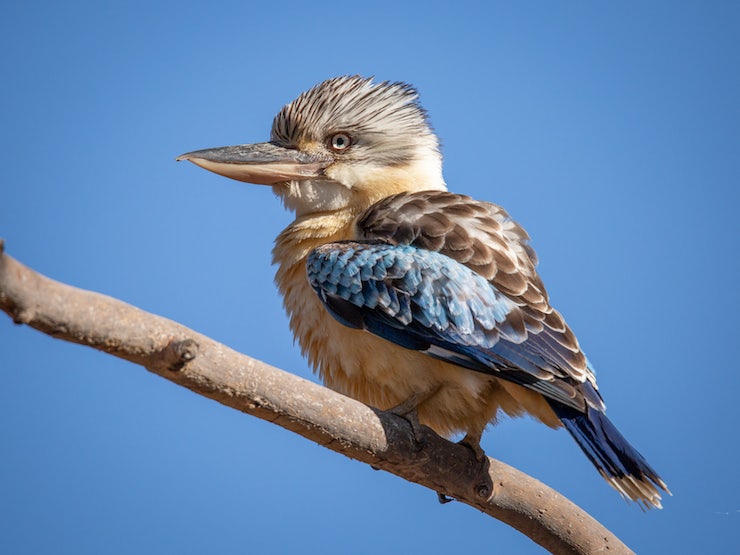 Blue Winged Kookaburra near our camp

The southern area of the Park is where the famous Domes are situated.  At first sight it’s easy to imagine alien intervention but the reality is that these amazing formations are sandstone towers coated in bands of iron oxide (orange bands) and grey-black bands of cyanobacteria. These outer coatings are very thin and once removed by erosion or human intervention the inner sandstone structure crumbles very quickly. 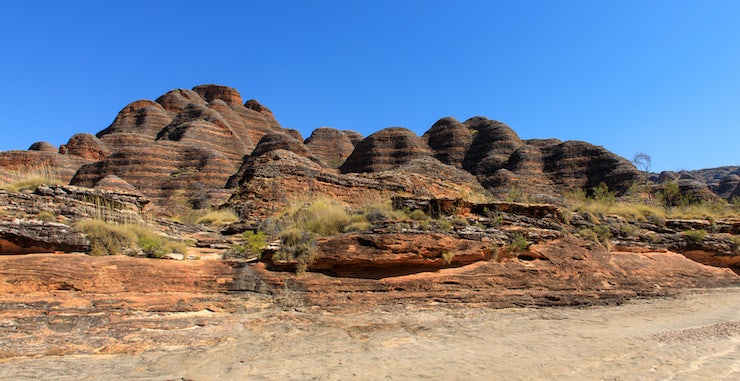 This landscape is so vast and so amazing that it is impossible to fully appreciate from ground level.  Having become quite accustomed to and fans of helicopter flights on this trip we were quick to book a flight to get a better grasp of the enormity of the area and snap a few aerials while listening to the pilots informed description of the area. 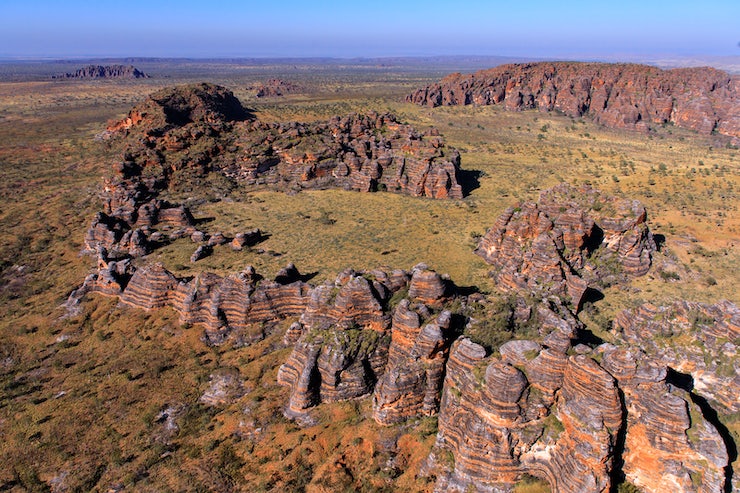 A small section of the Domes from the air

Back on the ground we drove down to the Piccaninny carpark then walked to the Piccaninny Creek Lookout a short hike that ends at a lookout with views of the Creek and the surrounding landscape including some of the domes.  On the same track, “The Window” seemed like it would be worth a visit and yes it is a hole in a dome and worthy of a shot or two.  The walk itself with the eroded creek bed shaped into fabulous lines, mounds and pebble filled hollows was certainly worth the effort. 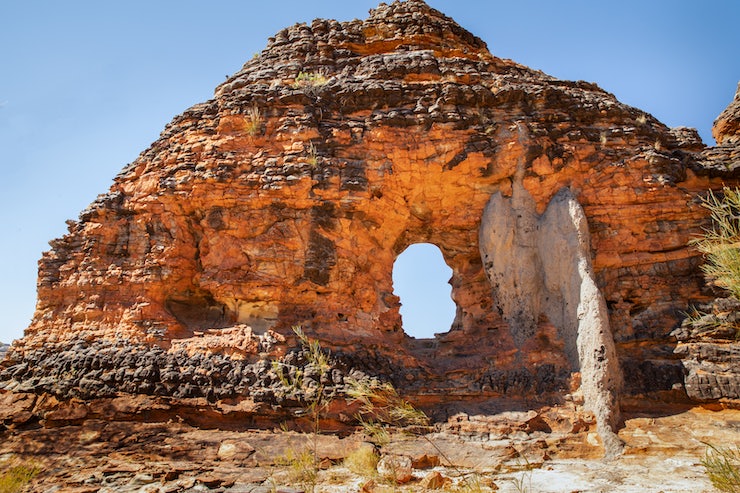 After much discussion about distance, the difficulty of walking in open areas in full sun when the temperature is 30 degrees plus and how much water would be required we agreed to continue on and tackle the 10 Kilometre return trail to Whip Snake Gorge since we were already at “The Window” which was more than half way there. Walking early in the morning made it relatively easy getting to the gorge.  We were disappointed to find that a recent fire had left the vegetation blackened but the amphitheater at the end of Whip Snake was still spectacular and again worth the effort.  Here as in Cathedral Gorge the water has almost evapourated and the sheer number of dead Cane Toads provide a frightening insight into the scourge that they are. The return trip in the midday sun and with our 7kg camera bags was certainly challenging for us but we marveled at young families with kids in tow – some so little they were being carried – they breed them tough these young Mums and Dads. 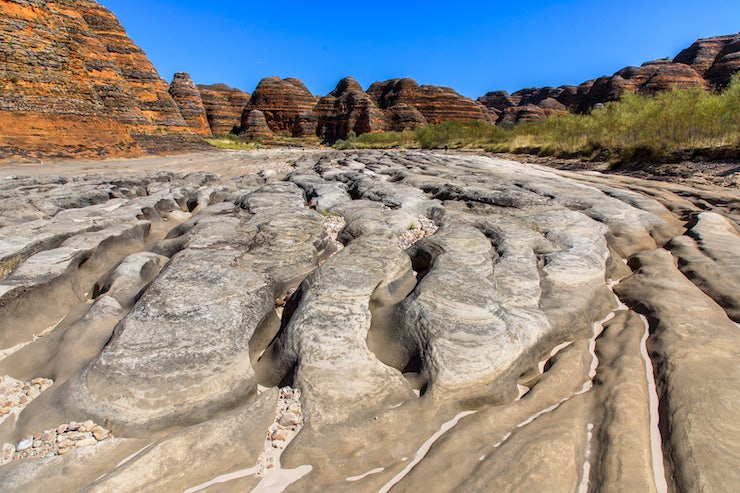 Undoubtedly beside the domes the jewel in the crown of Purnululu is Cathedral Gorge. Made more famous when it featured in the Qantas advertisement with the Choir singing “I am Australian”, this gorge is simply amazing.  Just a two km return trip from the carpark the gorge offers a little bit of everything culminating in a massive sandy-floored amphitheater with a (drying) water hole.    It’s the kind of place where people coming in just sit quietly in awe.  Each sound is echoed and amplified.  We visited the Gorge twice, once on the first day to get a feel for it and then very early on our last day so that we would be able to enjoy the experience without busloads of other people.  That tactic paid off and we spent about an hour exploring, photographing and testing out the acoustics with a rousing rendition by Bazz of “Waltzing Matilda” sung very badly but still sung.

On the way back, we tried to sum up Purnululu in a few words but really it’s a place you just have to see for yourself.  It’s spectacular, it’s amazing, it’s like nowhere else.

We have been and it’s beautiful.