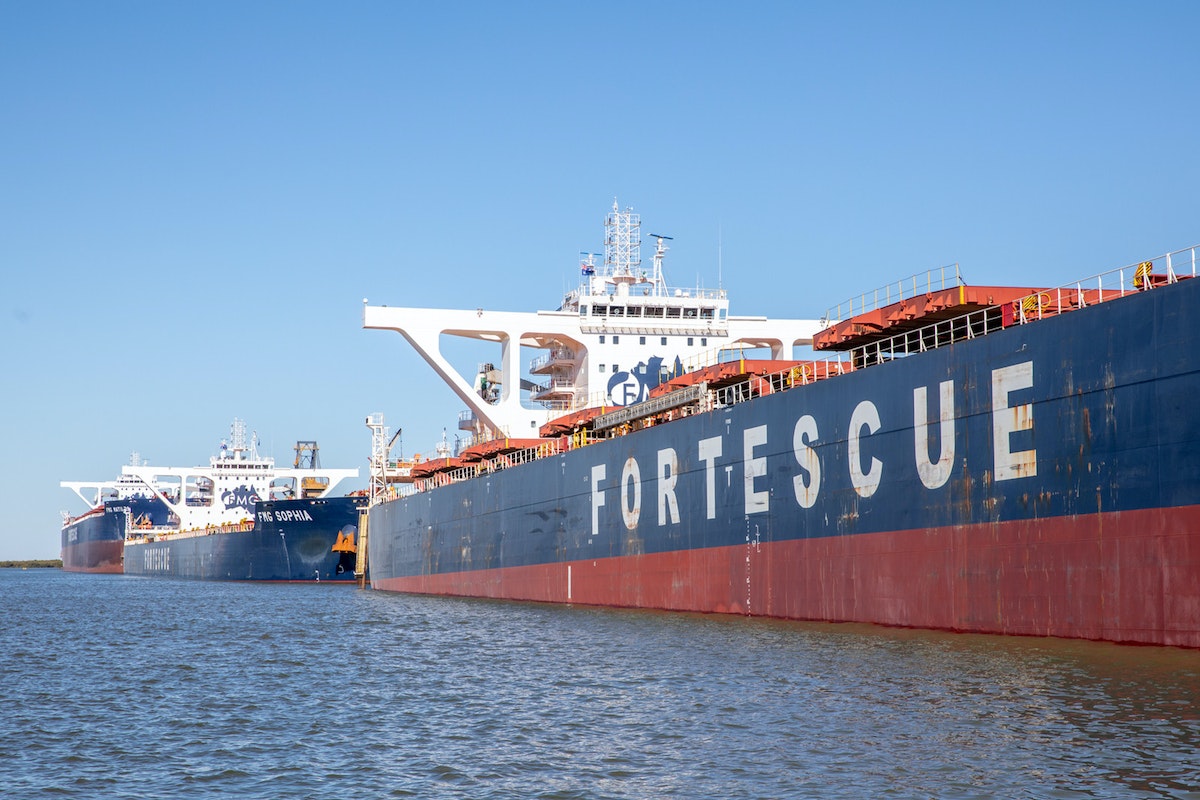 The sparsely populated Pilbara Region of Western Australia is often overlooked by travellers who prefer the coastal attractions of the neighbouring Kimberly and Gasgoyne Regions.  We have been guilty on previous trips of driving past the Pilbara but on this occasion we were lured in by the beauty of Karijini and stayed to enjoy the rugged beauty and the incredible riches of this amazing region.

Karijini has been the subject of a previous blog, that can be found here.

Our original plan was to leave Karijini and head South-west to Exmouth but school holiday crowds and cooler temperatures made it an easy decision to linger a little longer in the Pilbara and so we made for Newman.  On arriving at the Whaleback Caravan Park we found a tidy little mining camp run by BHP.  Accommodation for the miners is motel style with a dining room and recreational facilities. Campers are welcomed with green grass, shade, fabulous facilities and best of all washing machines and dryers at no extra cost.  We spent a couple of days enjoying Newman, checking out the mining artifacts and marveling at the lengths taken to make the town feel welcoming. 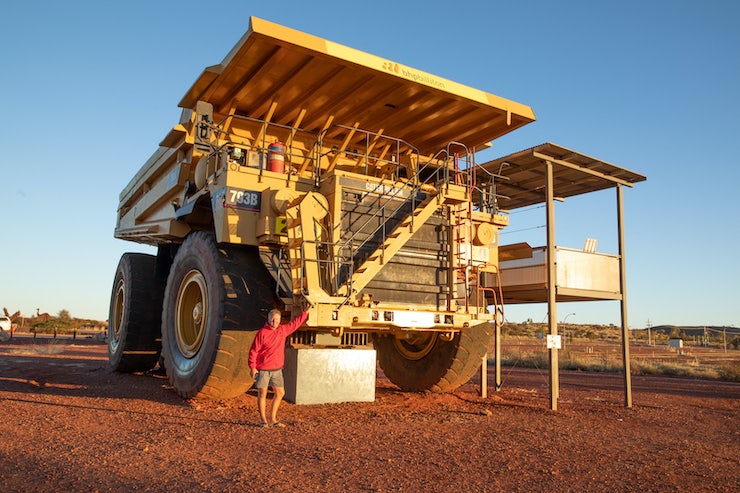 Mine Truck display at Newman

Leaving Newman we travelled in a northerly direction on the Marble Bar Road, part bitumen and part reasonable dirt road. Our journey was interrupted at one of the numerous train crossings and we guessed we were going to be held up here for a while when the guy in the mining vehicle behind up got out his car lit up a cigarette and proceeded to make a phone call.  Further up the road we came alongside the Roy Hill Mine located in the Chichester Range and owned by Gina Rhinehart’s, Hancock Prospecting.  The mine is expected to produce 55 million tonnes of iron ore a year and with an expected life span of 20 years, is set to become one of the largest mining projects ever in Australia.   Even from the road it is difficult not to be amazed at the size and scale of the operation. 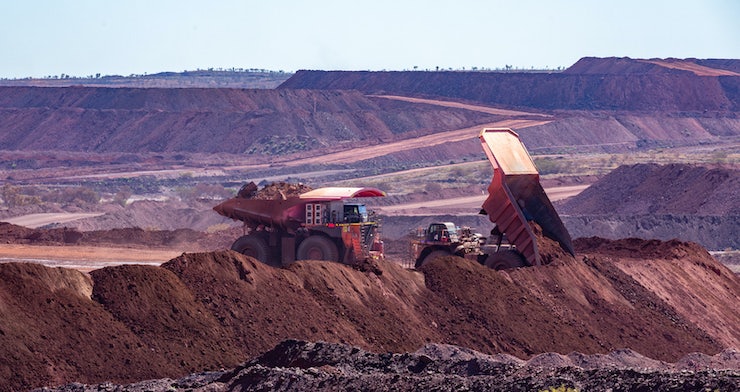 Besides mining, cattle is the other big industry in the Pilbara and we were fortunate to be invited to stay at a private water hole on Bonnie Downs Station. The station, which covers 3 million square acres, is one of three in the area owned by Peter and Matt Goyder.  The Goyder’s have been very successful in improving their cattle with Santa Gertrudis and Droughtmaster being the basis of the herd. The cattle, even to our untrained eye, looked to be in excellent condition. 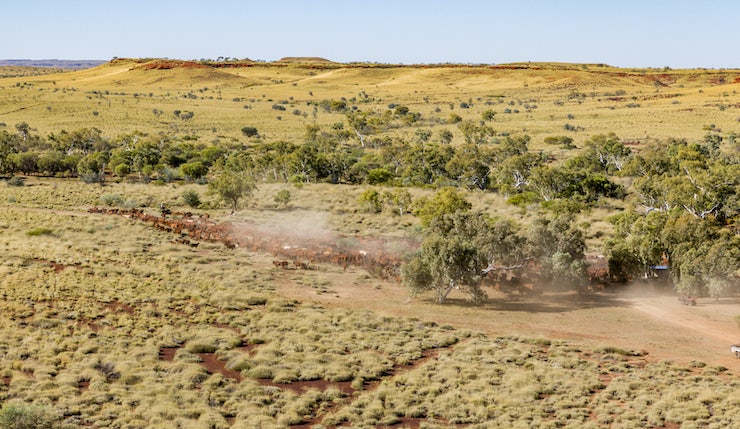 Just one days Muster in a process that will take months

At the time we arrived the annual muster was in full swing and would be for some months to come.  Matt Goyder is an experienced Helicopter Pilot so he, along with a muster team from New South Wales was managing the muster with assistance from CA Helicopters. The estimate for this year is that 11,000 head of cattle will be mustered.  Some will be live exported to China while others will sell on the domestic market.

Keen to get an up close look at the muster but not wanting to be in the way we accepted the invitation to tag along.  Peter led us the 30 kilometres from the Homestead to the Muster site and then we followed for awhile marveling at the skill of the four helicopters who were spotting and moving cattle out from under and around trees until the ground team on ATV’s, in bush basher 4 wheel drives and on motor bikes could direct the stragglers to the mob and the mob toward the cattle yards. 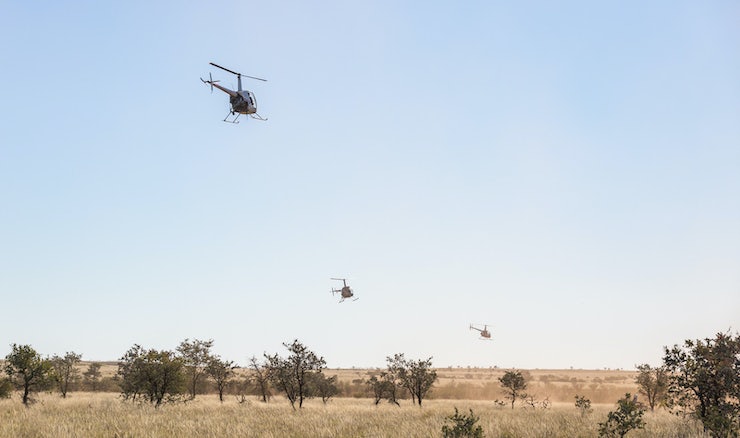 Helicopters direct the cattle toward the yards 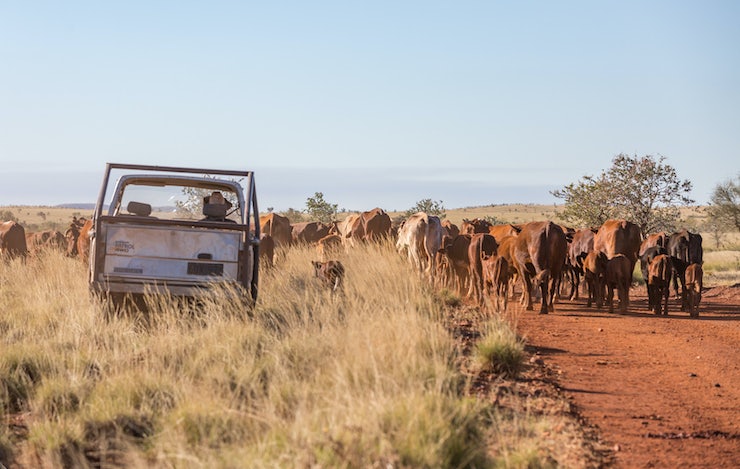 On the ground, bush bashers, ATV's and Bikes keep the herd together and moving.

The invitation to jump aboard one of the 4 helicopters was a surprise and one eagerly accepted by a pair of frothing (excited) photographers.  We spent an exhilarating 15 minutes seeing the muster from the air and it was something we will not forget.  At the end of the day the herd were secured in Cattle Yards ready to be trucked to the main homestead yards to be sorted into sale lines.

Before leaving Bonnie Downs we spent a fabulous day just sitting beside the water hole totally enjoying the wildlife coming in to drink as well as one very domesticated, very large bull who had Fran a little on edge. It is truly beautiful country. 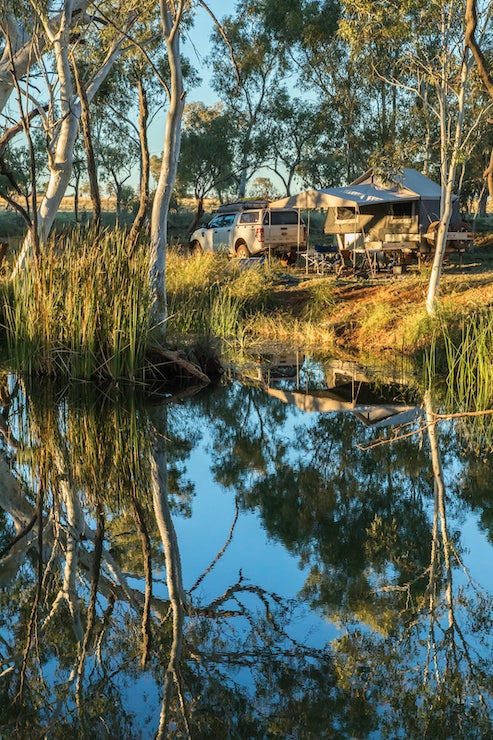 Our camp at Bonnie Downs

The drive from Bonnie Downs to Port Hedland was through hard red country clothed in spinnifex like a life sized dot painting.   The road took us through gorges and gaps that were truly beautiful and we would have liked to stay longer to explore but the lack of safe roadside parking and the presence of the many mining and cattle trucks had us moving on.  Marble Bar, the hottest town in Australia, clearly would have been somewhere to use as a base for further exploration of the area but an engine warning light after a flat battery had us making a beeline for Port Hedland (quite unnecessarily fortunately).

Port Hedland combined with South Hedland has a population of around 16,000 and coming into it just seems crazy; its big, its loud and its very VERY busy.  The entire place revolves around shipping out the resources from the mines in the region.  Iron Ore is the largest export but there is also Copper Concentrate, Manganese, Salt (going to China for steel making or Japan to melt snow!!), Lithium and a large pile of scrap metal that will go to India to be recycled. 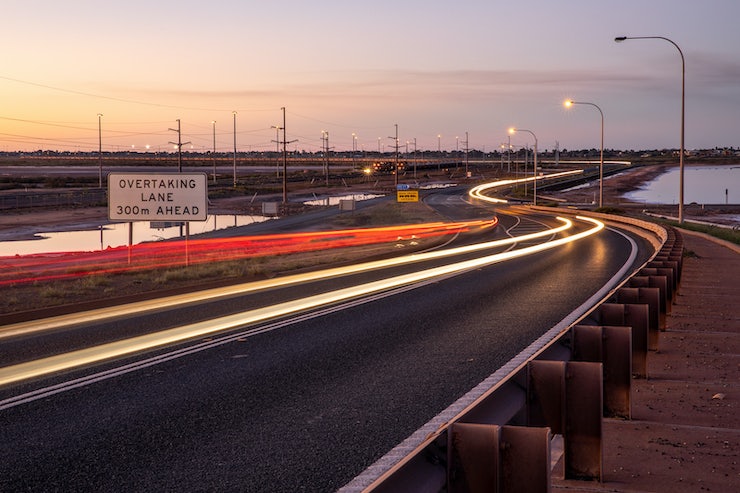 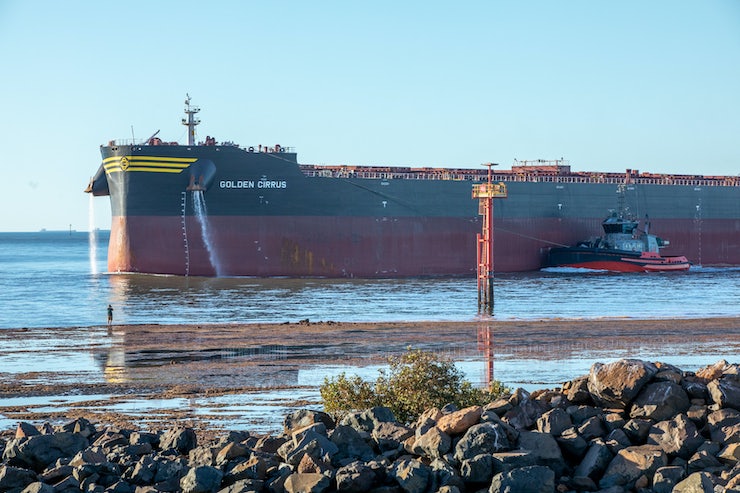 From the shore it is hard to get a feel for the size and magnitude of the Port so we booked a Port Tour with the Port Hedland Seafarers Group.  The Seafarers are a group of volunteers who look after the Ships Crews while they are in Port, they ferry them ashore, take them shopping, and lend an ear to any who need it. 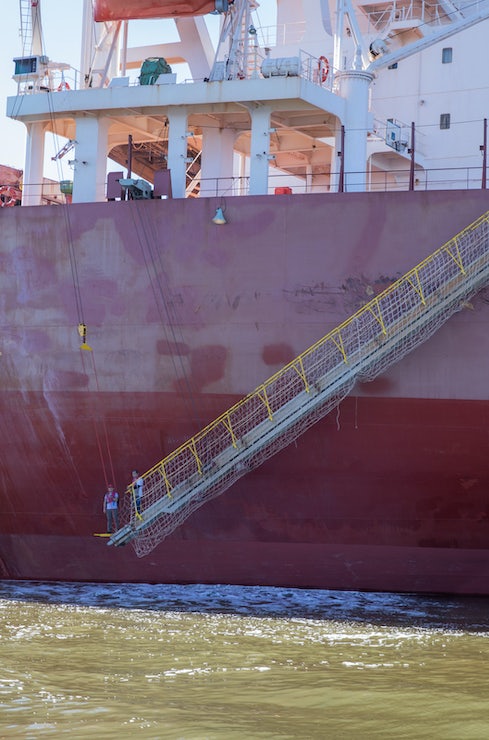 So a few statistics.  There are currently 19 Berths in the Port, owned by BHP, Gina Rinehart, Fortescue and the Headland Port Authority, which has a few berths for minor companies and the occasional Cruise Ship.  The average size of ships coming into Port is around 300 meters.  At any given time there will be around 30 vessels in the anchorage  (30 nautical miles offshore) waiting to come into Port.  They can wait for months if they are to load a particular grade of ore depending on availability.  Once they are in Port it only takes about 24 hours to load and they are gone again. The Pilot is ferried out to the boats by helicopter and four tugs bring each vessel into Port.  There is an average of 22 crew, most are Philippine and they are paid between $200 and $600 per month depending on experience.  Crews usually sign on to 9-month contracts and many of the boats just travel between Port Hedland and China.   Only about 1% of crew are women.  Nothing in this blog can truly explain the size and scope of the Port so if you are in Port Hedland – do the tour – it will blow your mind. 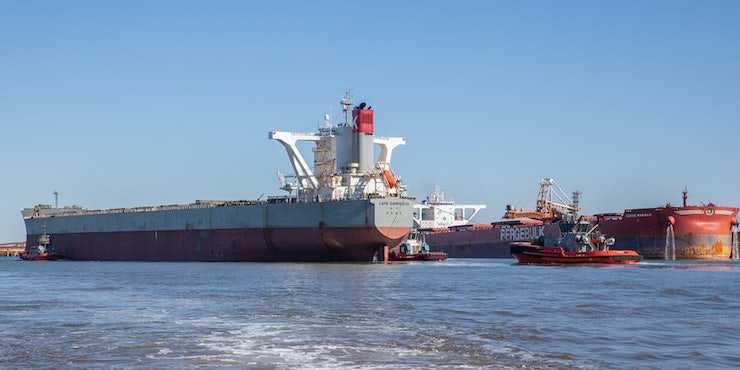 Talking to someone who was formerly a Port Lincoln resident but who now lives and works in Hedland he assured us the mining boom was most certainly not over. It seems like a few years ago the mining companies employed a lot more staff but then they had a clean out, got rid of some “dead wood” and now manage to export more resources with less staff.

In total contrast to Port Hedland our next stop in the Pilbara was at 80 Mile Beach. About half way between Port Hedland and Broome this is a caravan park behind a sandhill on a massive (140 kilometre) beach.  The park is very tidy and at this time of the year very busy.  We estimate around 300 camp-sites in the park and it has been mostly full for the four days we stayed.   At this time of the year it’s all about fishing.   Fishing revolves around the tides because at low tide the shoreline is so far out it can barely be seen but as the tide comes in fishers line the shore for miles all angling for Threadfin Salmon.  In the back rows are the “long termers” some of whom spend months here each year.  Those who don’t fish wander up and down the seemingly endless beach enjoying stretching the legs while looking for shells that are in absolute abundance. 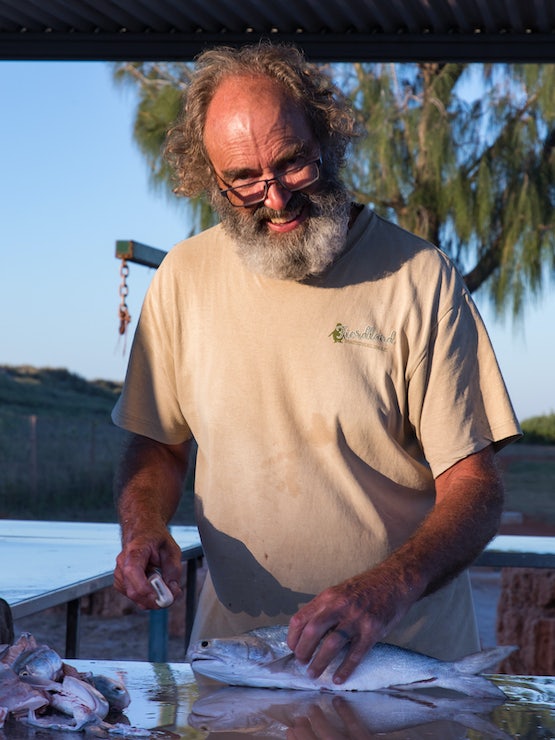 Cleaning the catch at the end of the day 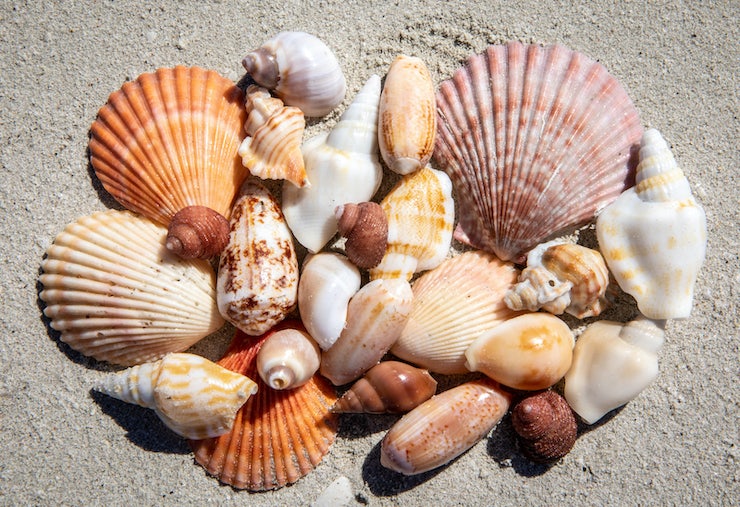 In the summer months turtles come ashore to nest but at this time of year it is the Pied Oyster Catchers who vy for space on the beach to nest and raise their chicks. 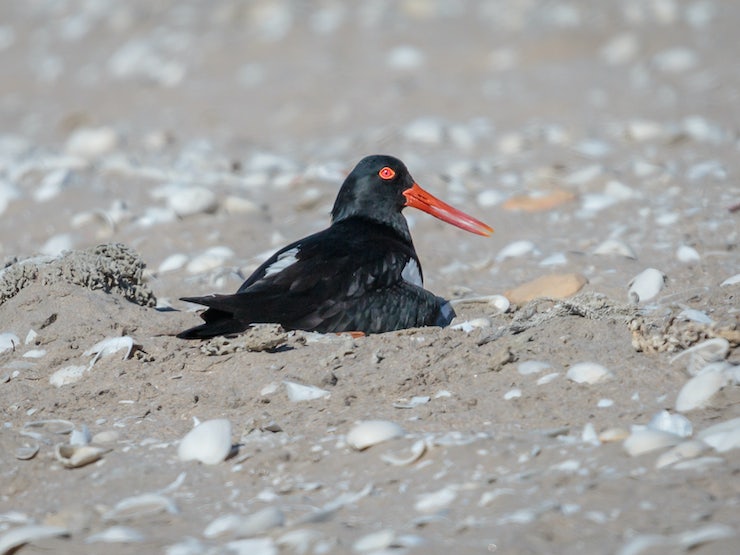 Pied Oyster Catchers nest high on the beach running the gauntlet of cars.  Some beach goers mark the nest to warn drivers to stay clear.

The Park Store caters for basic supplies and huge amounts of bait.  They also run a weekly market where second hand books are sold to raise funds for the Royal Flying Doctor Service and various enterprising individuals sell fishing tackle and handicrafts.

At sunset the beach fills with people coming to watch the sun sink over the horizon while families play on the wet sand or enjoy a sundowner on the dunes. Within an hour or two after sunset the park lulls into it’s almost silent night mode and the spectacular night sky and waning moon allow for great photography and perhaps, if required, time to reflect on life. 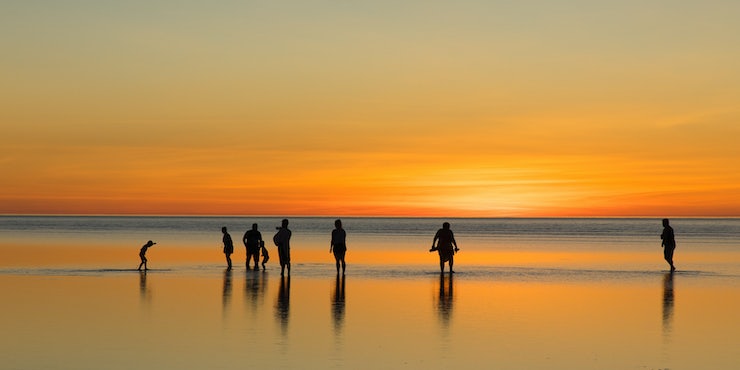